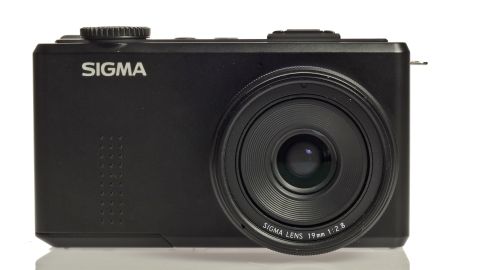 Better known for its lenses than cameras, Sigma has been producing both compact cameras and DSLRs for decades.

The Sigma DP1 Merrill is the latest in a line of compact cameras, and, similar to the previous DP models, it's not your average compact.

With a fixed 19mm lens (equivalent to 28mm), no built-in flash and only VGA quality video, it lacks many of the features you'd expect in a compact camera, especially one with a premium price-tag.

At the heart of the Sigma DP1 Merrill is the same APS-C sized Foveon X3 sensor as the Sigma SD1 Merrill DSLR, which is quite unlike the Bayer sensor design used by almost every other digital camera on the market.

Instead of separate pixels sensitive to red, green and blue colours, which are then processed by interpolation to make a full-colour image, the Foveon sensor is made up of three layers.

This means that each pixel is effectively capturing all three colours, so the image doesn't have to undergo any interpolation to render a full-colour result.

This sensor also doesn't require an anti-aliasing filter, which can reduce the amount of detail a normal Bayer sensor can resolve.

This Foveon X3 sensor design makes it difficult to compare the resolution to other cameras. You'll see that the resolution is quoted as 46MP, but it's not quite that simple, since when you open an image from the Sigma DP1 Merrill you'll find that they are actually 4704 x 3136 pixels.

So, in traditional terms the images are 15MP, but because each pixel is made up of three layers, the effective pixel count can be considered as 46 million.

The lens also has a manual focus ring, with a distance scale displayed on the rear LCD screen, along with nine individually selectable focus points for the autofocus.

If you don't need the wide-angle capability of the Sigma DP1, the Sigma DP2 Merrill offers the same facilities with a 30mm (equivalent to 45mm) f/2.8 lens.

As you'd expect of a camera at this price, you get a full range of exposure modes, including Fully Manual.

There are also three metering modes, with the option of Spot and Centre-Weighted, along with the default Evaluative mode.

There is the option of shooting raw, JPEG or both together, with seven colour modes including Vivid, Neutral, Portrait, Landscape, Black and white and Sepia available in JPEG images.

The raw files are Sigma's own X3F format, which can only be opened using the supplied Photo Pro software, since even older versions aren't fully supported by any other software.