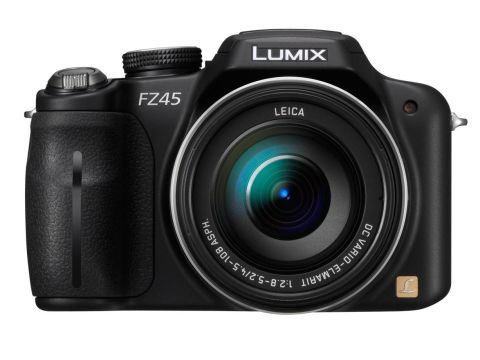 The Lumix FZ45 is a refresh to the older FZ38

Panasonic's been on something of a roll this year, bringing out a roster of well-received cameras such as the TZ10, and of course, the excellent Lumix G2 hybrid.

The big selling point of the new camera is a fixed 24x optical zoom, while secondary benefits include an overhauled AF system (the grandiosely named 'Sonic Speed') and 720p HD video recording in both motion JPEG and AVCHD Lite format.

There's an intuitively placed video record button, and it's all very straightforward. Indeed, there are the lots of other helpful widgets for camera novices, such as Intelligent Auto mode, while more experienced users are catered for by a proper PASM dial. Intelligent Auto mode is also available when shooting HD video, along with Aperture Priority mode for more confident users.

At this price, we predict the DMC-FZ45 will do really well. It's significantly cheaper than more SLR-like hybrids such as the Olympus Pen 2 and Sony NEX-5, while still offering plenty of advanced features.

The DMC-FZ45 certainly seems better equipped than comparatively priced compacts such as the Canon IXUS 300HS, for example.

When it comes to big zooms, a key rival is the Fujifilm Finepix HS10. It offers an even more impressive 30x zoom and is now retailing around £350. Three hundred quid or so will also account for the lion's share of an entry level SLR such as the Canon EOS 1000D, which comes with an interchangeable, rather than fixed, lens.

Another challenge for Panasonic will be persuading customers to stump up the extra cash to buy this, rather than the excellent Lumix TZ10; as mentioned, much of the sales pitch is based on that monster zoom lens and foolproof video mode.