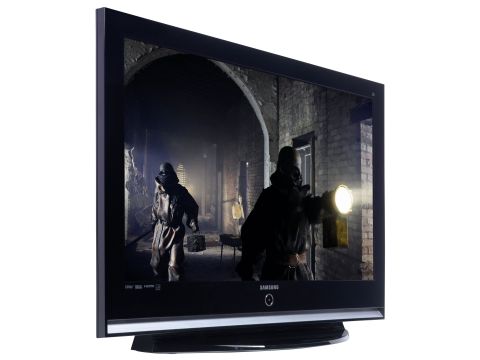 A fine looking plasma TV, with a pretty price tag. Performance levels are good rather than great, though

The PS42Q7HDX's imperiously elegant looks, ultra-glossy black finish, sensual curves and smartly contrasting white strip along the bottom, out-lovelies even the best-looking plasmas. An intriguing element of this design is that it appears to dispense with speakers. In fact they are there, but tucked inside the down-facing ledge created by the backward tilt of the angled white strip. Would speakers placed so discreetly produce half decent sound?

It's slightly disappointing to discover that the PS42Q7HDX only carries a single HDMI digital video input. But there is at least a PC connection, a set of component video inputs to secure the set HD Ready status, and support for a built-in digital tuner from a CI slot for adding subscription TV channels and an optical audio output for Dolby Digital 5.1 soundtracks.

The digital tuner is also supported by a 7-day electronic programme guide from which you can directly set timer events, while picture quality is backed up by Samsung's Digital Natural Image engine (DNIe) processing system.

DNIe incorporates processing designed to improve numerous aspects of the picture, including motion handling, black level response, fine detailing, colour vibrancy, and the naturalism of colour tones. It's given extra help on this plasma, too, by a new Smooth Motion Driver circuit that reduces image judder and false contouring by inserting 10 extra frames of picture a second.

Also new for the PS42Q7HDX is FilterBright technology, which integrates a filter in the screen to reduce reflections off it by a claimed 90 per cent.

The PS42Q7HDX's pictures are more successful than Samsung's previous plasmas. The biggest improvement is in its colours, which are much more vibrant and far less 'stripey'. Also very impressive are this TV's black levels, which reach depths of pure darkness to rival even those of Panasonic's latest plasmas (and that's saying something). The lack of reflections on the screen doesn't do any harm in this department, either.

When it comes to detailing and sharpness, meanwhile, the PS42Q7HDX looks damn fine with high and standard definition alike. However, while the PS42Q7HDX's pictures improve on previous Samsung models, they're still not truly outstanding. Some colours, especially bright reds, look a bit offkey. The picture looked generally noisier than we'd like, with some gentle low-level fizzing present pretty much all the time, but especially over moving objects.

Those hidden speakers cause some problems too. Their general sonic tone is nice enough, with trebles and mid-range information sounding well-rounded. But there just isn't the bass available to deliver a potent action movie soundtrack. There's much to admire with the PS42Q7HDX and it signals real progress in Samsung's plasma division, but it's still more beautiful on the outside than it is within.