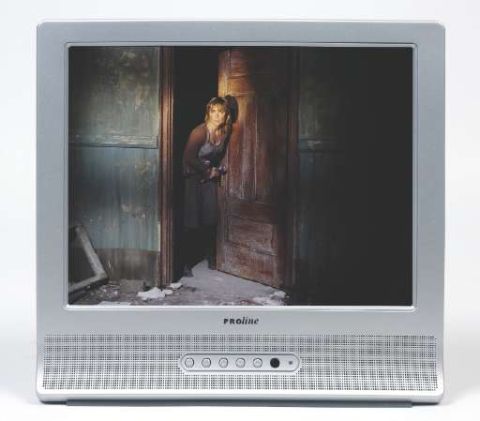 If you thought you couldn't go wrong by only spending £180 on an LCD TV, think again

Sometimes you have to look quite hard for a particular TV's main selling point, but not this Proline. Its chief selling point blares out at you: it's cheap. Of course, though, what's good for your wallet isn't always a treat for your eyes... The LD1401's looks perfectly match its price tag. The finish is overtly plasticky, the colour scheme is bland, and the overall construction feels flimsy.

Unsurprisingly, the LD1401's connections are basic, comprising chiefly, a single RGB Scart, a tuner jack, an S-video jack, a composite video input, and stereo audio inputs. There's no PC connection, needless to say, leaving the only unexpected finding a composite video output for piping the set's picture to a different screen. Though why you'd want to do this is beyond us.

We'd normally devote a few lines to a TV's features here, but the LD1401 doesn't have a single interesting feature to its name, so... Can its specifications give us some reason for hope? Not the lowly native resolution of 640 x 480, that's for sure. But then a chink of light appears at last, as we're promised a decent (for this screen size) contrast ratio of 500:1, and respectable brightness of 450cd/m2.

Sadly, these figures don't translate into decent pictures. In fact, the LD1401's pictures really are quite desperately poor.

Exhibit A is a truly horrendous colour performance. For starters, some hues, particularly those involving people's skin, look quite ridiculously over-saturated, even if you turn the level down massively. Next, while some colours look oversaturated, others look muted by comparison. Parts of the picture start to glow as if they're radioactive whenever the TV is asked to show certain dark blacks, greens or reds. Horrible, just horrible.

The picture tends to look very soft too, even when asked to show perfectly decent material such as a Sky News feed, delivered via the RGB Scart from a Sky Digital receiver.

Next, there's a (thankfully narrow) line of backlight spillage visible during dark scenes around every side of the picture, with the final insult on our brand new test sample being the appearance of an ugly, red and very dead pixel. Naturally not every LD1401 will have such a pixel fault, but finding one on ours is indicative of a generally poor construction standard.

Is there anything good we can say about the LD1401's pictures? Well, its black levels are pretty deep by 14/15-inch LCD standards - except for a the glowing colours, that is. Otherwise it's all bad. The LD1401's sound is basically as feckless as its pictures. Even at low volumes the speakers distort, especially when people are speaking and the situation becomes almost funny at high volumes. Needless to say, there's no bass either.

We appreciate that many people won't want to spend much on a little LCD portable for their kitchen or bedroom. But honestly, every single £1 spent on the LD1401 is a pound wasted. John Archer