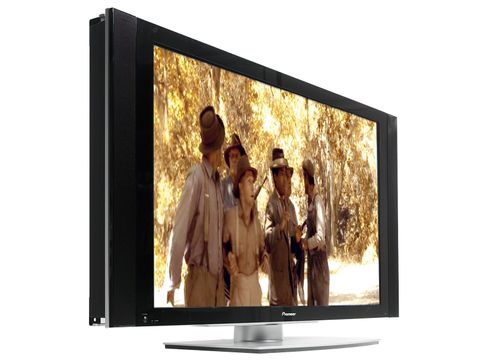 For now at least, this is comfortably the best largescreen TV you can buy

By launching the world's first WXGA plasmas in 1997 and then being the first to adopt HDMI digital connection, Pioneer has been technically HD Ready - and waiting - for quite some time. This means that, while Sony is rushing out its first HD Ready TV range this year, Pioneer is now into its sixth generation of PDP panels, and third generation of HD Ready TVs.Theoretically, no one should be in a better position to exploit the introduction of high-definition broadcasting.

Pre-empting the HD gold rush by several years has given the company time to perfect its plasma - a notoriously difficult technology to tame - and expand its panel production by buying NEC's existing plasma facility. This year sees the fruit of that collaboration and the introduction of two key technologies, plus some other subtle improvements on the HCC award winning PDP-505XDE.

Pioneer's new 50in PDP-506XDE has the same black styling as last year, with optional side-mounted detachable speakers and a separate media box incorporating a digital TV tuner. A table stand is included.

As is the case with rapidly evolving technology, wait a year and you get a lot more for your money. The media box now has two HDMI inputs, specifications have improved across the board, and the price has dropped below £4,000. The build quality here is high too.

Pioneer's proudest achievements, though, are two picture-enhancing technologies. The Pureblack panel has a crystal emissive layer that improves the stability of the colour reaction in each cell to give more vibrant colour and blacker blacks. Meanwhile, PURE Drive 2 HD is another proprietary video processing technology - like Philips' Pixel Plus - that uses 10-bit processors to reproduce video with smooth gradation and less MPEG noise.

The separate media box gives an obvious advantage in terms of installation; it deals with all of those tiresome cables and can be stacked with the rest of your home cinema, while a long DVI cable is supplied to carry video from box to screen. As the digital interface becomes more fashionable, the Pioneer's two HDMI inputs will also be a key advantage over rival panels that feature just one - three would have been even better! It's a shame there's no DVI connection though.

The digital tuner has auto setup and is accompanied by an analogue tuner, so you can enjoy features like PIP (Picture-in-Picture). The substantial remote is user-friendly and makes it easy to scroll around the logical onscreen menu. Within the menu pages, you'll discover some other nifty features, like the flexible Colour Adjustment settings and Pioneer's proprietary Home Gallery: a well-conceived picture-viewer allowing you to access JPEGs from a PC card on screen.

The improvements in picture quality over last year's award-winning 50in model are quite tangible. Given a well-produced DVD like the luxurious re-release of Titanic connected via HDMI to a reliable DVD player like Pioneer's own DV-989AVi, and you will be struck first by the deep blacks. During the closing credits (my favourite part of the film) the inky black screen behind the white lettering of the actor's names matches the black plastic bezel almost exactly.

Only Panasonic's Viera plasmas have managed to do this so effectively before. More telling are the underwater scenes in Chapter One where searchlights scan the wrecked hull. There's no better way to demonstrate the flaws in a plasma panel than when it struggles to cope with the colour banding that surrounds light sources. In this case, the colour gradation is impressive as the concentric circles are far less obvious than any rival panels I have seen. What's more, the contrast in the very murky depths is quite distinguishable, even in a well-lit room.

This is, of course, the one area where plasma traditionally scores over LCD. Unsurprisingly, the picture is utterly dependent on the source material and unforgiving of poor feeds. The built in digital TV tuner is a massive improvement on the all-but-unwatchable analogue tuners of previous generations - I could barely get a signal on the supporting analogue tuner here - but Freeview's bitrate is often fairly compressed as well.

Consequently, the smearing and MPEG artefacts that disrupt the image is more the fault of the broadcaster and transmission system than the panel maker. Otherwise though, the picture is strikingly bold in terms of colour with strong delineation.

Pioneer built this panel primarily for high-definition material and if you can find a way of playing some - our Tech Labs are kitted out with JVC's US-only D-Theatre system - the results are a huge step forward from standard-def DVD. Pioneer's boast of a 4,000:1 contrast ratio should be taken with a pinch of salt, but our more conservative measurement of 880:1 puts the PDP-506XDE right at the top of the class.

Pioneer's 'billion colours' is probably true; certainly, images have astounding colour fidelity. The impressive greyscale and smooth transition from one hue to another means that colour banding is kept to a minimum and the image appears particularly crisp and clear.

Pioneer has managed to secure its narrow lead over rival plasma TVs with this latest incarnation for now, and more than answered the challenge of fast-rising LCD alternatives. In all of the key categories - connectivity, contrast ratio and overall performance - the PDP-506XDE is convincingly leading its closest plasma rivals. For now at least, this is comfortably the best largescreen TV you can buy.