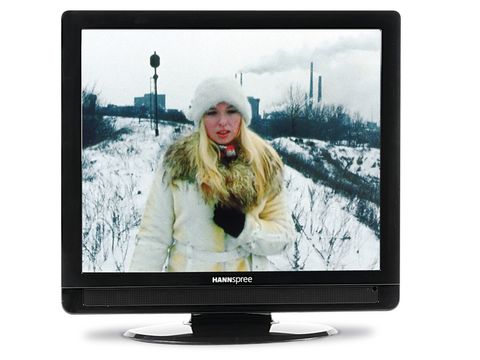 The sleek, black gloss ﬁnish of the HT11 initially impresses, although it's a shame that it attracts smudgy ﬁngerprints

Not bad for a bargain second set, but the picture performance is rather limited

Most household's have more than one TV screen, with second and third sets often located in the bedroom and kitchen, and that's where small panels like this 19in offering from HANNspree ﬁt in.

The lightweight HANNspree HT11 is easy enough to position and, while its lack of a widescreen aspect ratio doesn't do its spec credentials any good, its compact shape gives it a very small footprint.

As with a lot of screens of this size, the cable ports are located on the underside of the back panel, making them a little awkward to locate, but the pint-sized set can be easily manoeuvred and a built-in cable-tidy on the back of the stand will keep your wires in place.

The sleek, black gloss ﬁnish initially impresses, although it's a shame that smudgy ﬁngerprints do not come off with the same ease with which they go on.

Using the TV is a doddle and although the remote control looks a little cheap and plasticky, the buttons are relatively large and well-spaced making it comfortable and easy to use.

Our ﬁrst major gripe with the HANNspree is its failure to select the input source automatically, so
we had to select our Blu-ray player manually from a list of inputs.

As per many LCD panels, the screen is plagued by light creeping out at the top and bottom of the screen. There are three settings for the backlight and we found that the picture was most vibrant on the highest of these.

With standard-def material black levels are far better than expected, as are pure whites. However, rich colours look slightly washed out and lack detail.

Performance with high-deﬁnition material is surprisingly good on ﬁne detail and motion handling, but images suffer badly from a halo effect around bright objects.

We didn't have great expectations in terms of audio, so we weren't surprised to ﬁnd that the TV's speakers are pretty weedy and the volume needs to be turned up relatively high, at which point the speakers begin to sound tinny.

It's a great price for a second room 19in panel, though, especially as the set also doubles as a PC monitor courtesy of the VGA port.

But if you're after home cinema quality, then you'll be better off looking elsewhere.