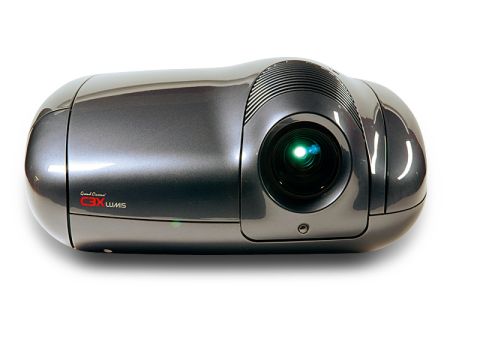 Like an Aston Martin, SIM2's Lumis 3D-S is curvaceous and exclusive

Despite the AV industry's best efforts, it seems the public's interest in domestic 3D may be waning. Indeed, it feels as if the format needs a 'booster shot' from some landmark film or product, to re-ignite public enthusiasm.

SIM2's C3X Lumis 3D-S could be just the product for the job – except that it costs just shy of £30,000, or a bit more if you go for one of its longer-throw lens options. In fact, it's about as mass-market as a Bentley Continental.

So, for most people, excitement will be limited to 'wow, look at what 3D can do', rather than it being a product they can buy for themselves.

But just the fact that the Lumis 3D-S can elicit 'wows' at all is enough to keep the 3D flag flying.

For a start, it looks drop-dead gorgeous, with more curves than a 1966 Raquel Welch and in all the right places, too. Plus, it's beautifully finished and can be bought in any of four striking colours: the standard high-gloss gun metal grey (which is what our sample came in), or white, black or red.

Since you won't be expected to install a £30,000 projector yourself, your installer will thrill to this machine's set-up flexibility. At the heart of its almost infinite tweakability is SIM2's Live Colours Calibration 2 software, which works in tandem with a colour meter to enable your lackey to get the Lumis 3D-S' colour palette looking essentially perfect.

The Lumis 3D-S' main 'wow'- inducing talent, though, is its picture quality, and its 3D pictures are far and away the best I've seen outside of a top-end commercial cinema.

A number of key factors contribute to this projector's near-perfect 3D images. Most significantly, its full HD, active 3D pictures don't suffer at all from crosstalk noise. This double ghosting phenomenon has plagued all previous 3D displays to date to a greater or lesser extent. But with the Lumis 3D-S I didn't find a single crosstalk ghost – and believe me, I spent quite a lot of time looking.

The Golden Gate Bridge sequence in Monsters Vs Aliens has become a classic crosstalk test scene, but every strut and cable of the bridge was reproduced by the Lumis 3D-S immaculately.

So what does the 3D-S do differently compared to all of its 3D display rivals? The answer glories under the name of Triple Flash.

This system, previously only used in commercial cinema installations, 'flashes' each frame of a 24p alternate-frame, full HD Blu-ray picture into the appropriate eye three times, giving each orb a 72Hz effect and producing a 144Hz overall 3D image. Doing this, claims SIM2, ensures there can't be any of the 'leakage' of one eye's picture information into the other eye, the problem that causes crosstalk.

That's not the only massive 3D performance boost Triple Flash technology delivers, either, as the 144Hz overall refresh rate also takes images beyond the point at which your eyes can perceive the 'flickering' that's so commonplace on other active 3D displays. Removing these two flaws instantly has a beneficial impact on 3D viewing, especially when you're talking about images measuring up to 300 inches across. It's as if active 3D technology has finally and suddenly snapped into focus.

The fact that the 3D-S is considered capable of driving 300-inch screens points to another huge weapon in its high-end arsenal: its exceptional brightness. A dimmable 280W lamp serves up brightness as high as 3000 ANSI Lumens, which pretty much combats the inevitable dimming effect of SIM2's active shutter 3D glasses (two of which are bundled).

As for other aspects of its picture quality, the 3D-S' colours during 3D viewing are the most natural I've seen on a 3D display, handling even the quite difficult and diverse tones of Tron in 3D with total accuracy.

What's particularly brilliant about this is that your installer won't even have to calibrate the 3D-S' 3D hues separately, for SIM2 has already measured the colour properties of the glasses so that its calibration system can simply apply the correct offset values to your 2D colour settings when the projector is switched to 3D mode.

Yet another brilliant aspect of the 3D-S' colour performance finds 2D and 3D images suffering no colour noise. The single biggest reason for this (and another justifier of the 3D-S' price) is its use of three 0.95-inch DLP chipsets, one each for the red, green and blue colour elements. This removes the need for the colour wheel used by single-chip DLP projectors, so you don't get issues related to colour wheels such as fizzing noise and the rainbow effect.

In the 'normal' projection world, a brightness level as high as the 3D-S' 3000 ANSI Lumens would raise concerns about its contrast potential. But it's quickly clear – particularly when watching 2D – that this video-chucker's black level response is superb, combining deep blacks with punchy whites and colours within a single frame.

Also striking is how naturally this excellent contrast range is achieved; there's no need to use a dynamic iris, so there's no brightness instability and shadow detail reproduction is outstanding.

It's not just detail in dark areas that impresses on the Lumis 3D-S, though. Its detail reproduction with both 2D and 3D HD sources generally is nothing short of mesmerizing, providing an awesome reminder of why full HD 3D was invented.

Completing the conversion of your home into a movie theatre is the Lumis 3D-S' motion handling, which is crisp and effortlessly natural. SIM2 has built some motion processing into its latest projector, including a mode specifically designed for 3D. But while this did improve the look of one or two sports-based sources, for the most part I'd recommend leaving it turned off.

With our 100IRE full white display, the SIM2 drew 241W. However, the projector's lamp doesn't vary its brightness, regardless of content, hence the near-identical figure.

A post-calibration contrast measurement of 65,000:1, with a luminance of 17.9fL, is very impressive.

The complex colour management system allows calibration to 6,500K. Of the various presets, we measured D65 in Native mode at 6,700K.

Try as I might, I'm really struggling to come up with anything bad to say about the Lumis 3D-S. Its remote control is rather rubbish – although owners will likely ditch it in favour of a wider-ranging home entertainment controller anyway.

It also runs a touch noisily, especially when you're watching 3D. But again, a good installer should be able to work around this.

In other words, my efforts to moan about the Lumis 3D-S have proved pathetically ineffectual. Which is just fine by me, actually. I really don't want anything to undermine the main point about the Lumis 3D-S, which is that as well as being a typically sensational SIM2 2D performer, it's far and away the finest 3D display I've seen.

So much so that it won't fail to persuade even the most hardcore of 3D sceptics that the format is more than just another gimmick.