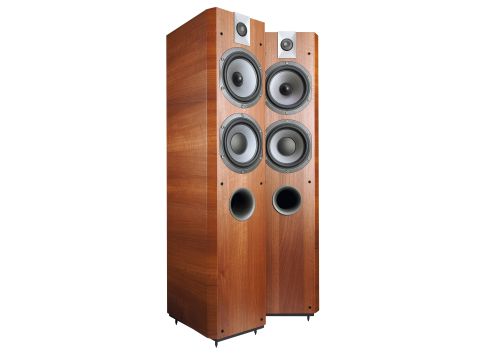 Focal is France's leading specialist hi-fi speaker manufacturer, and one of the leading players on the international scene. Whereas the Focal name was originally reserved for the raw drivers that the company once sold to other makers, the company's complete speakers used to be marketed as JMLab. Today, however, all is Focal.

The Chorus name has long applied to the company's least costly range of speakers, but in 2006, Focal introduced not one, but two distinct Chorus ranges - a simpler 700V-series and a more elaborate 800V-series - which amounts to no fewer that 10 stereo pairs plus a gaggle of AV extras.

Although the basic enclosure shape and driver types are similar in both the 800Vs and 700Vs, there are numerous detail differences. The 700V's most obvious economy measure is the elimination of the 800V's costly separate alloy plinth. Instead, the 716V comes with spikes that fit directly into the base of the enclosure. Not only does this lead to reduced overall stability, the spikes themselves were too short to fit easily, and came with silly thumbwheel lock-nuts that were difficult to tighten and keep tight.

Wrapped in Amati vinyl woodprint, the distinctive styling has tapering side panels, so the internal faces are not parallel to avoid focusing standing waves. All the panels are 20-25mm thick, with further stiffening provided by internal bracing.

Focal manufactures all its drivers in its French factory. Both cone drivers have 165mm cast alloy frames and 115mm diameter paper cones coated with 'Polyglass' glass 'micro-spheres', though the uppermost bass/mid driver has a different dust-dome treatment from the bass-only unit.

The familiar Focal inverted dome tweeter has an aluminium/magnesium alloy diaphragm, and is mounted in a rigid cast chassis at the top edge of the enclosure, unobstructed by the V-shaped grille. A large diameter front port provides bass loading, and signal is applied to a single terminal pair.

Finding the right positioning for the 716Vs proved quite tricky, as the bass is too dry with the speakers well out from a wall, but too heavy when close up. Best results were found with the backs about 60cm out from the rear wall, but this will vary somewhat depending on individual room characteristics.

Analysing its sonic performance didn't prove easy either. Although the 716V is not without its fair share of imperfections, it has powerful purposefulness too. Too much warmth and a degree of 'hollowness' add some unwanted colour to the sound, yet at the same time there's no denying the fine voice articulation and high class communication skills, thanks to unusually incisive detail.

This is probably down to the very precise definition of the tweeter. However, because the top end is also obvious, this is not a particularly sweet sounding speaker - nor is it all that transparent. Indeed one could fairly accuse it of sounding rather matter-of-fact and lacking romantic appeal.

But it's difficult to argue with its effectiveness in transmitting musical detail. If the 716V makes little attempt to seduce, it does a much more impressive job of telling it like it is, and that in itself provides rich reward.