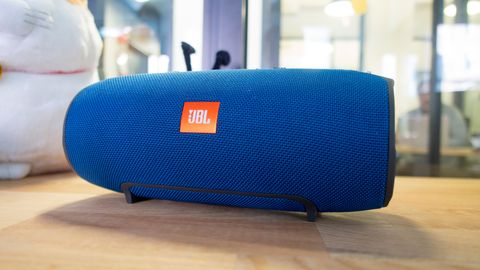 JBL's Xtreme isn't as good at pumping out high fidelity sound as its cousin, the Infinity One, but at that, it's still a fantastic speaker. Sound quality, battery performance and the splashproof design are on-par with what you'd expect for the price.

It's no coincidence that JBL's massive Xtreme Bluetooth speaker resembles the Infinity One so closely. After all, both companies co-exist under the umbrella of renowned audio giant Harman. But even so, JBL's latest lifts even the smallest details, such as the design language, button layout and the ports, from Infinity's first portable speaker, which released last year.

So, where does the JBL Xtreme deviate and forge its own path, if ever? The Infinity One isn't the best choice for outside enjoyment, but that's what the Xtreme prides itself in. It's a bigger, tougher, splashproof version of its classy cousin.

JBL's speaker is educated in handling the elements, and it can pipe your tunes for up to 15 hours before needing a charge. This all comes at the cost of $299 (£249, about AU$423, though the product isn't available in AU at the time of writing), which, surprise, is the same cost of the Infinity One. But being splashproof, its only unique quality, just isn't enough to set the Xtreme apart from its better-sounding relative. That said, it outperforms many of its excellent, cheaper competitors with booming sound and a long-lasting battery.

The JBL Xtreme lives up to its name in several ways, and it's design is one of them. The speaker's 4.6-pound build makes it a behemoth compared to more totable options, but it wears its weight well. This cylindrical boombox is wrapped in a slick, uniform sheet of mesh fabric that echoes the more playful look of the UE Boom.

Its sides are capped in soft rubber to give the Xtreme some resistance from dings, something that I wish the Infinity One had. Its dual bass radiators take center stage here, detailed with a slick, spiraled etching and rather subtle brand placement. Up toward the top of the speaker, JBL installed tough, brushed metal hooks that allow you to hook on the included strap. This adds versatility, making it easy to loop the speaker over your shoulder during a walk or hang it from a tree branch for an outdoor gathering.

The buttons, which are located on its top, cover the usual list of functions found in a modern Bluetooth speaker, with one small surprise in the mix. This tube-shaped speaker features JBL Connect, a button that allows you to pair up with a second JBL Xtreme wirelessly. It's unique, but fairly useless unless you have it in your plans to buy more than one of these pricey speakers.

There's a Bluetooth button that can be held down for a few seconds to pair a new phone, tablet or computer. Next up are the volume buttons. No surprises here. The play button on the right side of the panel has a few useful functions. Giving it a press while cranking out music will pause the playback. Tap it twice to skip songs, three times to go backward in the song selection. These extra commands are minor but welcome inclusions in any Bluetooth speaker.

Around its back, the JBL Xtreme hides its ports behind a zipper-protected compartment. When unzipped, you can get a peek at the 3.5mm port that allows you to plug in music from an external source, as well as two USB ports for charging your portable devices. There's also a power jack where you can plug in the power brick. And although the zipper is neat-looking and a novel way to keep things dry inside, I found that it came at the cost of cumbersome port accessibility. Plugging wires in with little effort was a constant struggle.

With a name like Xtreme, you'd hope that its performance delivers and, thankfully, it does. This speaker is capable of the super-loud playback that you'd expect from its size, which is perfect if you're trying to pump tunes through a large venue or outdoors. But even so, playing music at high volumes does you no good if the sound isn't up to par.

Solid audio performance runs in the Harman genes, and like the Infinity One, the JBL Xtreme sounds excellent. I found that during my tests, it handled jazz, hip-hop and rock songs well and highlighted the particular facets that make each genre unique. Jazz and hip-hop are bass-heavy and mids are relatively warm in their sound. Rock sounds punchy, with highs that don't distort at high volumes. The Xtreme handled all three just right.

If you asked me last year if the Xtreme represented the pinnacle of sound performance for the size and cost of the unit, I would have said yes. But, in time since then, I've heard the Infinity One. And as good as JBL's twist on the cylindrical speaker is, the Infinity One is still my go-to choice for excellent audio fidelity.

The Xtreme is also a competent speakerphone. I took a few calls with it and the voice playback was clear. The recipient also reported that, thanks to the noise and echo-cancelling microphone built into the speaker, my voice sounded as if I speaking into a phone.

Connecting to JBL's mega speaker is simple and the Bluetooth tether is strong, stretching from one end of my apartment to the other without a blip of signal cutout. It's 10,000mAH internal battery has no problem pushing its advertised 15 hours of music playback at normal to loud volume levels. At a lower volume, I was actually able to squeeze an extra two hours out of the battery life, pushing the number up to about 17 hours.

JBL's Xtreme offers stellar sound performance and a long-lasting battery to keep the beat going for up to 17 hours, depending on how loud you listen to your music. It's suited for the outdoors with a splashproof design and is a smart choice if you don't want to sacrifice sound quality for durability.

I've been doing a lot of comparing between the JBL Xtreme and the Infinity One, and while JBL's super-sized speaker does enough to set itself apart, I'd ultimately go with Infinity's for its superior sound fidelity. The One is much more fragile and thus is more suited as a coffee table centerpiece than the Xtreme. But, its sound profile is more balanced and rich, pumping through more accurate bass performance. However, there is one sacrifice: its 5,000mAH battery, which powers music playback for only up to 10 hours.

Extending outside its immediate family, there are a bunch of speakers available that do everything that the JBL Xtreme can do for less money. Candidates like the UE Boom and the TDK Trek Flex offer a similar style and splashproof capabilities, and can act as a speakerphone, too. However, JBL's speaker smashes them all with superior sound quality and battery life, coming together to make for a smart purchase, if you have the money.