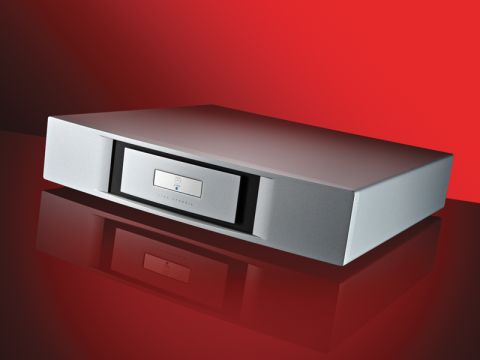 Brings vinyl back to life. The Uphorik could easily win over the next generation of LP enthusiasts

It goes without saying that Linn's Uphorik phono stage will have plenty of appeal to serious vinyl enthusiasts: those lucky individuals with a top class turntable, arm and cartridge, who are intent on making their precious collection of LPs sound as good as is humanly possible.

Yet, the Uphorik will also appeal to record fans in general, proving once and for all that the vinyl LP is still very much alive and kicking in 2010. Which is pretty impressive news, given that its rival, the compact disc is fast approaching its 30th birthday.

More importantly, vinyl is becoming increasingly popular among younger hi-fi enthusiasts born long after its heyday. And unlike CD and downloads, vinyl is a very 'hands on' medium. So much so, that many listeners feel they're more in touch with their music, especially when listening to a vintage pressing of something recorded forty or fifty years ago.

And all this talk of vinyl brings us neatly back to the Uphorik and its other key selling points; adaptability. For example, it can be fine-tuned to suit different pickup cartridges. A plethora of micro-switches mounted on the base lets you alter gain, impedance, and select the appropriate loading capacitance and resistance to achieve optimum results.

The Uphorik even offers inputs for Fixed Coil (MM) and Moving Coil (MC) pickups. And in addition to a set of normal unbalanced outputs using RCA phono plugs, there's also the option of balanced operation via XLR plugs, as well as a choice between standard RCA Phono plugs, or three-pin XLR.

Various micro-switches customise the Uphorik to suit your choice of cartridge. Located on the bottom of the unit, once you've found the right combination of settings, you can set them and forget them.

Linn's website naturally suggests optimum combinations for its own cartridges, so expect a certain amount of trial and error with other pickups. But don't worry; the effect with most MC pickups is subtle rather than seismic, as you're simply fine-tuning the basic output.

Adding capacitance reduces the upper frequencies, while load resistors 'damp' the cartridge. The smaller the value of the resistor, the more damped the cartridge will be. With everything 'off' you'll get the brightest, liveliest, most energetic sound. As you add capacitance, the top end will grow smoother. Adding loading resistance should give the sound a bit more solidity and control. But much boils down to personal taste – you might just as easily prefer the sound with no added capacitance/resistance.

Unless your moving coil cartridge has an unusually high output that risks input overload, go for the highest gain possible. Doing this gives a bigger more dynamic sound, with brighter bolder tonal colours. However, if the sound is overly forward and aggressive, reducing input gain will help to tame things.

The Uphorik is housed in an aluminium case, with components laid out on a single mother board. The circuits have aluminium screening covers over them, while the switch-mode power supply is housed in its own special aluminium box and placed as far away from the electronics as physically possible.

The casework is well finished in a choice of silver or black. The Uphorik does not offer hefty 'battleship' build quality, but the use of lightweight aluminium casework is actually a good thing sonically, and should have a less detrimental effect on sound quality than a thick heavy steel case.

The various micro-switches for gain/impedance/loading are clearly labelled. Once set, they can be left. Linn actually recommend hardwiring your preferred settings. This provides better contact than the switches and improves sound quality. You can do this yourself – or ask your dealer to do it.

The unit runs very cool, and is physically silent. Even with your ear pressed to the casework, it's virtually impossible to tell whether the Uphorik is switched on or off. And while £1,850 might seem quite steep for a phono stage, it's actually a fairly 'normal' sort of price for something of this calibre. You can pay less, but you can also pay significantly more.

While the law of diminishing returns applies here, the Uphorik does deliver plenty of performance for your outlay. If you already have a top-class turntable/arm/cartridge, a phono stage capable of revealing its true calibre without doubt justifies spending this sort of money.

Easy on the ear

Although it's true to say there's nothing warm or romantic about the Uphorik, it's not cold or clinical either. It offers striking clarity and razor-sharp focus, yet sounds smooth and refined.

To provide comparisons, we sampled a number of high-quality phono stages including Audiolab's 8000 PPA (good value at £550), Sutherland's PhD, Trichord's Delphini, and Chord's Symphonic – all excellent designs that set very high standards of performance. Our cartridge was a Lyra Argo and the turntable; an Origin Live Calypso or Thorens TD-160HD.

The Argo cartridge is a very good tracker, capable of negotiating highly modulated grooves without losing control. Its crisp, open tonal balance and immediacy produce a relatively bright treble. Partnered with the Audiolab, however, the Argo can sound rather forward; heavy brass passages rasp impressively, but exhibit too much sting.

Substituting the Uphorik for the 8000 PPA reduced this brightness/forwardness. The Uphorik sounds noticeably cleaner and more refined, yet offers comparable crispness and immediacy. For all its brilliance, the Uphorik has a deliciously smooth and refined presentation. It's sharp and detailed, yet surprisingly easy on the ear.

The Uphorik was able to convey the placement of voices and instruments in the soundstage with outstanding accuracy and precision. In complex pieces of music we noticed better separation, with increased ambience and depth.

Bass is weighty and solid, with good pitch definition and depth. Compared with the Uphorik, the 8000 PPA's bass seems a touch stronger and more powerful. Bass guitar and bass drums have slightly more impact via the Audiolab – as though strings and skins were being hit harder – but the Audiolab is also a shade coarser/harder.

In this respect the Uphorik isn't always 'impressive'. It's easy to mistake its smooth clean neutrality for lack of impact, when (in reality) it's simply not adding its own chatter.

Vinyl is an additive sort of medium and some additives are addictive and nice. The Uphorik gives you the plain truth – it reveals but does not embellish. Used via its unbalanced outputs, the Uphorik more than holds its own against the other phono stages. Via its balanced outputs, matters improve noticeably.

The sound gains in terms of body and solidity – you get a far greater sense of fullness and texture and the overall soundstage seems bigger. Every LP sounds impressively solid and focused. The music has amazing presence, giving the performance increased purpose and attitude.

Used via its balanced outputs, the more expensive Chord Symphonic comes the closest to matching the qualities of the Uphorik, but the latter sounds even firmer and more solidly focused. The Sutherland PhD offers subtler tonal differentiation and a more natural top end, but can't equal the Uphorik's bass weight and dynamic presence.

The Uphorik is an outstanding phono stage (suitably partnered) to make you fall in love with vinyl. It delivers a sound that's neutral and natural, yet colourful and full of incident. If you're able to use it via its balanced outputs, we think you'll find the results very hard to better.

Of course, the Uphorik is not cheap; nor are a suitable turntable, arm and cartridge to partner it. But listening to music from vinyl LPs is where it's at – a hugely enjoyable, life-enhancing thing. It's hard to describe the thrill you get playing a 20 or 30-year-old LP and hearing it reproduced superbly. Quite simply, it is an amazing, magical experience!