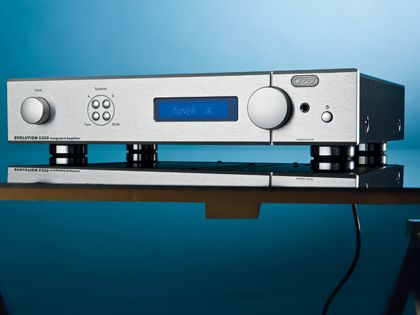 One of the most attractive amps in its price range, with a sound that's immediately satisfying

If you've a long memory for matters audio, you'll surely remember early Creek amplifiers. They came in unpretentious black boxes, quite small and with basic features and specifications; and they didn't cost a lot – but they worked well and sounded lively and sold in healthy numbers. In many ways, they embodied the spirit of 1980's audio in what one might call the 'budget audiophile' sector.

To that extent, Creek hasn't changed tack one bit over the years. You could show the new Evolution 5350 model to anyone as a perfect example of just that term, substituting '2010' for '1980s'. Physically, however, its resemblance to its forebears is slight.

It's bigger all round, the front panel is thick brushed aluminium, there's a display instead of a row of push buttons and fit and finish are improved.

The previous 5350 (SE) was rated at 85 watts, but the new model manages 120 watts, which is quite a lot from a relatively slimline package like this. High power requires a substantial energy supply and, in particular, a very large transformer, and it's this that accounts for a good deal of the 5350 Evolution's weight.

The considerable heat associated with powerful amplifiers like this is, however, dissipated by a pair of enormous internal heatsinks.

Amplifier power has, on the whole, been creeping up over the years and while on the one hand 120 watts is only about 1dB more output (one or two steps on a typical electronic volume control) than 100 watts, it's an accumulation of little steps that has seen a rise from the 25 watts or so typical 25 years back. That's over 6dB, a far-from trivial difference!

In one way, this amp seems a little under-specified by modern standards and that's input provision. It has as standard, five line inputs (one can be converted to phono as an optional extra), with no front panel mini-jack or digital input or other such fripperies. Actually we rather like a front-panel input, but it's not the end of the world reaching over to the back once in a while, as we suspect not many people really need more than five inputs!

The output provision, however, is more in line with current thinking, including the individually switched speaker terminals. Creek has designed a new power stage for this amplifier, leaving behind the MOSFET output that was used in some previous models, but still using MOSFETs in the driver stage.

The output now uses bipolar transistors, in fact two pairs per channel to give better handling of high currents. And, as in quite a few modern integrated amps, each power amp channel is an independent board, while the preamp section occupies a third board.

Quite a few components are surface-mount types, but Creek has chosen through-hole ones for a few jobs, mostly capacitors and higher power resistors. The main power supply is also worthy of note, as it uses no less then 16 main smoothing capacitors. This is something that we've seen in previous Creek amplifiers and it's a smart idea, giving a lower total impedance than one or two large-value capacitors.

Input selection and volume control are electronic, with the volume steps being variable, 0.5dB over the top 18dB of range, then 1dB over most of the rest. As is often the case, that makes for a good few rotations of the volume knob to cover the range, but on the other hand it's very easy to advance in small increments. The dimmable display does a good job of telling you what's going on, with volume steps numbered (as they ought to be, but aren't always!).

Build quality is very good across the board. The case is all steel, apart from the front panel and the knobs are solid metal too, which is a nice touch. The use of quite thick sheetmetal gives great rigidity and the top panel is not particularly resonant.

Input sockets are pretty basic commercial types (gold-plated though), while the output terminals are nice chunky ones. On the electronics side, there are some very good op-amps in evidence and one of the most highly regarded electronic volume control chips and it's hard to find any grounds at all for criticising value.

It's also worth mentioning the various forms of protection that Creek has built into this amp. Like many of its kind, it has sub-circuits that monitor output current and component temperature and shut down operation before any danger level is reached.

But the cunning addition here is a simple verbal display of what's up, so that you know immediately, if it's deliberately shut down and not just blown a fuse. You have to be pretty brutal to trigger the protection, mind you, as the circuit is intended to drive four-ohm speakers and as Mike Creek opined on the phone when we spoke to him about this amp, it pays to be realistic.

Having the luxury of a long review period with this amp, we were able to try it under all sorts of circumstances, from the usual sessions with tried and trusted favourites to some rather critical listening to a newly made recording.

Of course, we did some swapping around so as to compare it with familiar references, amps that we've known for a while – but each time we regretted having to take it out of the system. That's not to say it was better than the references (some of them are very good indeed) but it's an easy amp to get attached to.

Most of all, that's because it has a really lively way with music, giving full rein to the energy the performers put into recording it. Most amps do that sort of thing, but this one really seems to excel at it, making the music that much more involving and simply delightful to listen to. This isn't just a question of the well known 'pace, rhythm and timing' aspects, but also requires good control to keep the speakers precisely in check, and keen dynamics too.

It's not unknown, however, for audio components to be lively, but still a bit lacking in some of the specifics, which can lead to frustration in the long term. No such danger here, we're happy to report.

OK, the bass doesn't quite have the 'slam' and definition that you hope to get from a monster monoblock power amp and the treble isn't quite as sweet as the finest valve amps may be able to offer, but the compromise is small and by the standards of competing amps we're not at all inclined to quibble.

In fact the combination of extension and tunefulness in the bass is very fine indeed, while the midrange and treble are really beautifully neutral.

Detail, too, is something a bit special for this class of amp. It's not so much the fact that it's there – it usually is, most of it anyway, with any decent amp – but it's the way it's effortlessly presented and at the same time integrated so that one isn't bludgeoned into paying it attention if one isn't in that kind of mood. It's just there when one wants it, like a beer in the fridge: take it or leave it.

We jest, but this kind of attribute really makes hi-fi a pleasure to own and use.

It seems almost unnecessary to add at this point that the 5350 Evolution always feels at home in any style of music – even some pretty raw stuff we tried in the shape of a demo from a local band. It's happy playing loud and it gives no sense of frustrated energy when playing quietly.

It doesn't try to be something it's not and you won't mistake it for fancy exotica, but it's a fine honest-to-goodness integrated amp that does an admirable job.