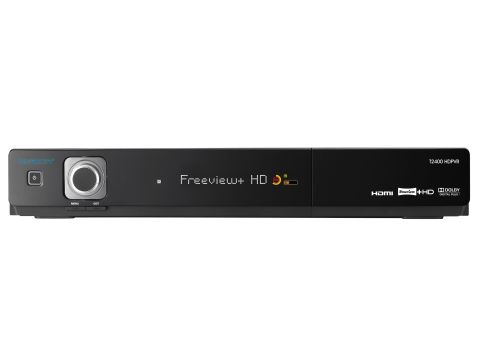 After tuning-in digital channels over a couple of minutes, the T2400 presents a good-looking eight-day electronic programme guide.

A mere one hour's worth of schedules over just five channels are shown on a single page, though colourful and hi-res graphics are used to devastating effect. Well-defined lettering and easy to read fonts meet a colour scheme of yellow and white text on a black and grey background; the end result is an EPG as attractive as any in the recorder market.

While the EPG is being inspected, and schedules searched (by keyword or genre), a window in the top-left-hand corner plays a thumbnail of the current TV channel, while the audio plays interrupted beneath.

Recording is a cinch; click on a programme from the schedules and a choice of single record/series record/reminder is presented. Choose record and it's added to a list of scheduled recordings that's accessible via a 'fastext' shortcut option.

If you pick three programmes to record simultaneously, a 'conflict' banner appears that offers you a choice of 'alternate instance' (another broadcast time or date is found) or 'manual method' (do it yourself).

Our only complaint is some slight colour banding in parts of the guide page, and that the schedule grid flickers while it's being toggled through.

We also noticed that some options seem to have been named by a non-English speaker, with 'reservation' used instead of 'record', and 'resolve OK' where something more descriptive such as 'alternative broadcast found: recording scheduled' would have been better. Although only days from going on sale, Icecrypt is overhauling the Englishness as we write.

Another oddity is that the remote lacks a 'recordings' button, and finding a simple list of what's been recorded is actually quite difficult. Eventually we found a button sporting a graphic of a page, which we guess is a logical icon for a library; it leads to a simple list with the title, date and transmission time recorded.

This same translucent page gives details of the space left on the HDD, options to create and name folders of recordings, and move files either within, or to a USB drive.

A 30-minute episode took just over a minute to move a USB stick, with the resulting MPEG4 files saved as a TRP formatted file. It's not rocket science to find a media player or some file converter software that handles TRP files, but nor is it particularly easy – Windows Media Player nor Quicktime natively support TRP.

Recordings can be skipped through very easily using the remote's arrow keys, with the percentage of the programme gone shown on a progress along the bottom of the screen. Half or quarter speed slo-mo is also possible, while the 'jump' button can be set to between one and 10 minutes.

Aside from those minor issues, the T2400's interface comes across as quick, good-looking and easy to use – helped by a remote control that's large, well weighted and comprehensively labelled – but it's not the slickest set of controls imaginable.