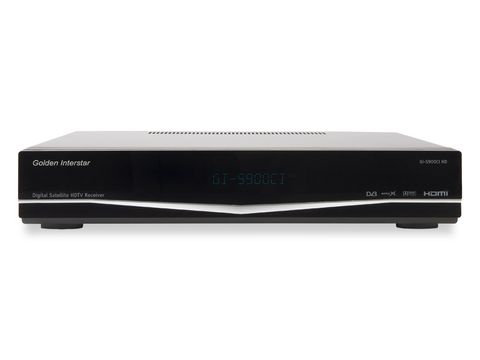 Good though the AV quality, speed of use and uncomplicated menu systems are, there's too much wrong with this receiver to recommend it yet. Unless, that is, you have no plans to 'go motorised' and consider timeshift to be a frivolity. The lack of an RGB Scart standard-def output is disappointing, especially if you have a DVD recorder. Although irrelevant to satellite viewing, most modern HD receivers can play MP3 files and view holiday snaps. We hope such multimedia capabilities will be added in a firmware update that also fixes the bugs.

Hi-def TV is fast becoming mainstream, and the prices of the hardware needed to receive it are falling despite the weak pound. German brand Golden Interstar is new to us. Here, we look at its GI-S900CI – a single-tuner receiver with support for DVB-S2 and hi-def, in addition to regular standard-def DVB-S. As with other sub-£200 receivers, external USB storage is needed for PVR operation. Features include HDMI and component hi-def outputs (with upscaling of standard-def), CAM emulation and a pair of CIs.

The midi-sized S900CI is minimalist and smart, with a comprehensive fluorescent display with permanent clock. A front panel flap lowers to reveal two CI slots and a card reader. There's no front panel USB port, but a set of buttons facilitate menu access as well as the usual volume/channel-change and standby, so it's possible to operate the receiver without the bland-looking handset.

Its construction is solid – were you to take the lid off the machine you'd find a modestly sized main board (with a Sti7100 chipset and Serit DVB-S/S2 tuner) and separate power supply. The S900CI runs cool in use, too.

Satellites are set up via the installation menu; there, you'll find a 'switch type' box. If you have a DiSEqC switch box with multiple LNBs/dishes connected, then select the appropriate setting and the various LNBs (and the satellites they receive) can be entered in the four boxes beneath. This easy approach is welcome. If you're using a single LNB on a fixed dish or a motorised DiSEqC setup you'll only have access to the first set of LNB settings.

Those using motorised dishes can specify whether they're using a DiSEqC 1.2 or USALS mount in the 'motor control' box beneath. Press the handset's 'enter' button after making the appropriate choice, and the dish menu appears. From here DiSEqC 1.2 users can select a satellite/ transponder and move the dish eastwards or westwards until the satellite is found; repeat for all of the desired satellites. The signal strength/quality bars are show a responsiveness more akin to professional meters. But only continuous dish movement is allowed; a 'stepping' mode would have aided dish peaking.

SETUP: The menu system is simple, but enables you to be operating the GI-S9000CI fairly quickly out of the box

With our review unit – loaded with the latest firmware – DiSEqC dish movement is erratic; sometimes it would change direction for no apparent reason. There's another bug associated with this receiver's DiSEqC implementation. After setting all the dish positions we tried to carry out an auto search – available in the installation menu's 'channel scan' option. From here, you select one of the previously determined satellites.

Do so, and the dish moves to the selected satellite in readiness. You can then select the type of scan (FTA, encrypted or FTA/encrypted). However, after starting the scan the dish then moved to its east limit instead of staying in position. Needless to say, no services were found. When the scan was cancelled the dish dutifully returned to the satellite! The same problems were noted with a Moteck positioner (which allows DiSEqC 1.2 receivers to drive conventional dishes) and an Alsat DiSEqC mount. Clearly, further work is needed here.

The manual search option allows you to specify a transponder (frequency, polarity and symbol rate can be entered manually), and network searches are supported. But FEC adjustment is only possible for DVB-S2 channels. This isn't uncommon now, but the S900CI's inability to accept user-defined PIDs is rare. This effectively denies the S900CI access to trickier services like news feeds, oddball radio stations and ITV HD if conventional scans (as before, encrypted and/or FTA services) cannot find them. The absence of blind search – even in its inferior software-driven guise – is another disappointment.

A range of other menus look after a variety of parameters including languages, clock settings, default digital audio output mode, CAM details, USB backup/ restore of the channel database, USB firmware upgrades, a sleep timer/wake-up channel and video output. On which subject, the TV Scart can only be configured to deliver composite or S-video – incredibly, there's no RGB Scart option. Associated with this an option that tells the receiver how 16:9 and 4:3 programming should be displayed. Changing between the HDMI output modes, meanwhile, involves a press of a button rather than menu-fiddling. You're given the choice of 720p/1080i for hi-def, or 576p for standard-def – there's no 576i mode.

The enter button brings up the channel list, which can be sorted alphabetically, or by the type of encryption used. Also available is a handy quick-find function. Enter the first few letters of a channel's name and the receiver homes in – there's a useful handset shortcut for this too. Placing channels into the eight favourites lists – four TV, four radio – is also simple.

FAVOURITES: It takes just a few clicks to assign channels to one of the four favourites lists, or to sort and search the list for specific channels

Running alongside the master channel list that appears you'll find four vertical columns representing the favourites selections. If you find a channel that stands up to repeat viewing in the master list, use the arrow keys to highlight the desired favourites column and press enter – a tick confirms its addition. In normal use a favourites button on the handset gives you a chance to select one of these lists. Another button short-cuts to a list of available satellites.

Pressing the Info button gives you a basic info pop-up about the channel and programme, the time and technical information like video standard (576p/720p/1080i), signal strength/quality, channel number, audio/encryption/subtitle and satellite. Press it again, and full EPG programme details are shown. You don't get the full range of parameters (such as resolution and soundtrack bitrate) offered by, say, the Echolink 7020 or recent Vantage models.

The EPG may support seven-day schedules and direct timer scheduling but its design is boring. It's arranged in a table with columns containing the channel, current programme and running times. Pressing the info button brings up the EPG details of the currently highlighted programme and pressing enter invites you to add it to the timer.

To use these facilities a FAT32-formatted USB storage device of sufficient capacity is needed. A high-capacity solid-state device should suffice for recording radio and TV programmes, but for time-shifting (and the best capacity for the price) an external hard drive is the best option. The remote's USB button displays a menu from which you can connect/disconnect, format or browse the device. A schedule list option lets you to check or manually add to the timer schedules.

New recordings are deposited in folders named after the channel they originated from. This is only a single-tuner unit, but you can view a programme whilst recording another if both are on the same transponder. Recordings are in the standard transport-stream (.ts) format, and can be played on a computer.

The unit's own player is basic but serviceable, but it can take a long time for the contents list to appear if you have a large drive filled with files. Select a recording for playback and you can pause, cue and review as desired. The S900CI ignores JPEG images, MP3 audio, DivX/XviD files and even recordings made with other USB PVRs. And it won't recognise small-capacity (e.g. 128MB) USB drives.

PLAYBACK: The GI-S9000CI will only play back its own recordings, not multimedia files or recordings from another PVR

The manual presents the option of time-shifting to a buffer, but we couldn't get this to work even with the latest firmware installed. Pressing pause only froze and unfroze the picture – a simple feature that's available even without a USB storage device.

Picture and sound quality from HD channels like Arte and BBC HD produce intricate detail and vibrancy. Artefacting was barely perceptible. You could easily tell the difference between 720p (Arte) and 1080i (BBC) channels. A noticeable drop in quality can be seen after changing to SD channels, especially if those pictures are fed into a revealing hi-def display via upscaled HDMI. The comparative lack of detail is one thing, but artefacts are more apparent too. Using an S-video analogue Scart connection can improve matters when viewing SD.

This receiver is very responsive. Changing channels and menu access are both fast, but the scanning speeds beat those of many more expensive units we've tested. It found around 800 FTA TV (some HD) and radio channels in under three minutes. The S900CI delivered the goods from all of the key European satellites using a 1m dish and 0.8dB.