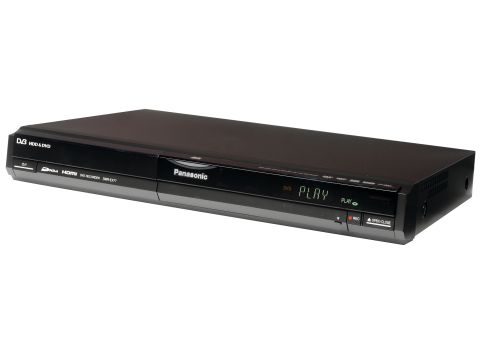 Another fantastic digital deck from Panasonic, but Sony's similarly

We have reviewed the DMR-EX87, an HDD/DVD recorder with a mighty 250GB capacity. Clearly, not everyone needs such a large hard disk, and its for these users that Panasonic has come up with this 160GB version, which costs a good £150 less.

The EX77 shares the same plain black styling and impeccable build quality of the EX87. But unlike its sibling, is also available in silver if you fancy going a bit retro.

The deck boasts an almost flawless feature list, with few significant omissions. Perhaps the most attention-grabbing feature on the spec sheet is 1080p, 1080i and 720p upscaling, which maximises the quality of DVD and recorded images on HD Ready and full HD TVs. It won't give you proper high-definition picture quality, but should offer some improvement over plain old 576p images.

Significant, too, is the inclusion of a Freeview tuner, backed up by a superbly designed seven-day EPG. It makes setting timer recordings effortless, but sadly there's no Series Recording feature as found on Sony's latest range of HDD combis. There's also no back-up analogue tuner, so make sure your Freeview reception is up to scratch.

The hard disk offers up to 284hr of recording time, and the deck will write to any DVD disc you care to slip into the tray, even dual-layer DVD-R and +Rs (but only when copying from the hard disk). As for playback, it spins most types of disc except DVD-Audio.

The connection roster is equally comprehensive and includes the all-important HDMI socket, component video output, two Scarts (offering RGB input and output) and an optical digital audio output. There's no CI slot for pay TV, but it's no great loss.

The front sports iLink input for transferring DV camcorder footage, an SD card slot plus S-video and composite video inputs. This may be more generous than your average digital recorder, but it's trumped by the similarly priced Sony RDR-HXD870, which, offers USB and PictBridge.

For recordings, you can select one of four quality presets (XP, SP, LP and EP) that enable you to trade off picture quality for recording time. There's also a Flexible Recording mode, which fits a programme onto the remaining disc space in the best possible quality.

As is the norm for Panasonic recorders, there's a wide range of editing features. You can add chapter points, accurately delete specific parts of a recording and perform other basic functions, but for advanced editing requirements you can use the Playlist function. This allows you to arrange chapters into new sequences and play them back without gaps.

You can then transfer the end result onto DVD with your edits intact. This process is ultra simple and quick thanks to the step-by-step guide and high-speed copy mode, which lets you dub a one-hour EP HDD recording to 12x DVD-R in just 48 seconds.

Rounding up the prodigious feature list is Viera Link, Panasonic's HDMI handshaking feature that makes it possible to control several components with a single remote.

The user manual is fatter and more complex than a quantum physics text book, but once you've learned the basics you can pick it up quickly thanks to the clear, logical layout of the user interface.

Particularly impressive is the central setup menu and Direct Navigator screen, where your recordings are stored and labelled by moving thumbnails.

The DVB function is slick and well presented, from the Sky-style EPG through to the ultra-quick digital text facility.

Finally, the buttons on the remote are arranged with pleasing care and thoughtfulness, which makes it easy to access the deck's many functions.

The DMR-EX77's recorded picture quality is nigh-on flawless. Recordings from the built-in tuner in XP look identical to the source broadcast and boast a level of vibrancy and sharpness that'll make you forget VHS ever existed.

It's best demonstrated by crisp, studio-based fare such as BBC News 24 or ITV's late morning chat shows. The deck's expert MPEG2 encoding captures the vivid reds and pastel shades of the studios, and image clarity is aided by a lack of edge bleed or block noise.

SP's ability to squeeze two hours onto a DVD will make it a popular recording mode and the results aren't far off XP quality. Only a smidgeon of extra noise around the edges of some objects reveal that you're in a lower-quality setting.

Both modes can handle fast-moving sports action on Sky Sports News without lapsing into bouts of pixel shimmer and block noise.

Even in LP mode the deck still provides very enjoyable picture quality thanks to its use of 500 picture lines.

Of course, the HDMI output helps recordings look their best particularly when upscaled to 1080p. But the deck's upscaling comes into its own when it's fed a pre-recorded DVD such as King Kong. Skull Island's vistas are stunningly detailed and colourful.

Audio quality depends largely on your sound system, particularly when it comes to 5.1-channel movie soundtracks. But with CDs played through the analogue stereo outputs, it turns in a more musical performance than you'd expect. Difficult, delicate sounds such as Miles Davis's muted trumpet on his Kind of Blue album, sound crisp and pure, but it's equally at home reproducing the fiery guitars of Coldplay's X&Y.

Recording quality is staggeringly good and the wealth of editing features makes it highly flexible.

When shopping, bear in mind though, that Sony's RDR-HXD870 costs the same, but also includes USB and Series Recording.