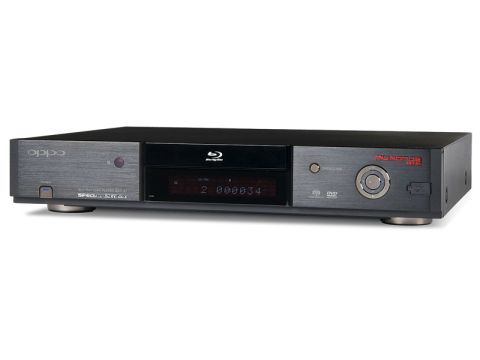 If the Oppo BDP-83SE NuForce Edition looks familiar, it's because it is. This is a Special Edition of Oppo's long-lost European Blu-ray debutant, the BDP-83, with some additional pixie dust from NuForce.

NuForce is an American brand, which is best known for selling high-performance amplifiers and pre/power solutions. It offers a CD player and media server, but this modified Oppo is the company's first venture into the world of Blu-ray.

The original BDP-83 was reviewed way back in 2009. At the time, the brand was on the verge of setting up a UK base to develop its Blu-ray range. At the last minute, though, that plan seemed to collapse, and the BDP-83 was never given its proper release. Oppo's invasion of the UK was over almost as quickly as it had begun.

So what's the story with this NuForce Edition? To find out more, we'll need to take a peek under the hood.

The player itself is the same battleship grade deck we saw on the standard version. It looks expensive and is reassuringly heavy. The unit has a distinctive textured front panel, with centrally placed mecha-deck and a USB input neatly disguised by a rubber bung.

A universal model, it can play Super Audio CDs and DVD Audio discs, as well as the usual roster of BD, DVD and CD platters.

For a BD player with audiophile pretensions, you might not expect too much in the way of networked media playback, but this BDP-83 SE has some surprises in store.

From its home screen, you can scour your network for attached PCs and NAS devices and then start scrabbling around for content. Regretfully, file support is not that extensive. While it could see and play MKV-wrapped hi-def material and MPEGs, it was oblivious to AVI and DivX over my network.

Playback from local USB flash drives fared better. From here, MKV playback was joined by those errant file types. The player can even play .srt subtitles.

Audio playback is limited to MP3s; surprisingly there's no support for more esoteric music file formats, such as FLAC. That said, I was impressed to find that when the player streamed music from my audio server, it also recognised and displayed the sleeve artwork I had sitting in the folder.

The deck also has access to a very modest online content portal, dubbed Blu-TV. Contrary to its salacious handle, there's little of interest here to inflame the extremities. The current Blu-TV offering breaks down into innocuous widgets, games and channels. At the time of writing, only one channel is available: Urban Trek – a UGC (User Generated Content) guide to US cities, with Flickr pictures and hotel and restaurant reviews.

Navigation is hopeless, so I didn't feel inclined to persevere. Unless you really feel a need to play Solitaire or Sudoku through your Blu-ray deck, I don't think this will get much use.

NuForce's stated objective is to improve the analogue audio performance of this deck above the base model. So the power supply has been blessed with some new circuitry and Sabre DACs drafted in to replace the original's Cirrus Logic DACs.

A single 8-channel Sabre DAC feeds the multichannel analogue output, while the stereo feed gets a particularly high-end audiophile solution, in the shape of an ESS Sabre32 DAC divided equally between the two channels.

NuForce has made other less obvious (but quite inventive) changes, including removing redundant capacitors from the stereo signal path (it assumes the player will be partnered with pre-amps and AVRs which already have DC blocking circuits) in an effort to maximise signal quality.

The company has also disabled the player's muting circuits, which silence any DAC operations which may generate noise. This tweak is a little contentious, as those muting circuits are there for a reason and that's to prevent unpleasant pops and buzzes.

You need to get into the habit of turning on the player before your amp, as well as killing the volume when you hop from PCM to DSD in the Audio Setup screen.

Just to reiterate, all these audio improvements relate to the player's analogue board. You will not benefit if you just route audio over HDMI.

Reflecting its refinement, the deck delivers a very low 155.4ps of analogue jitter. The BD83's audio settings allow SACD DSD to bitstream directly to compatible (in all probability Sony) receivers; however, the engineers at NuForce suggest that converting to PCM in the player (aka Forced PCM Mode) before going to the Sabre32 DAC is 'close to identical'. It's a suck-it-and-see exercise.

For me though, t'was not an issue. I wasn't using any DSD compliant hardware, so everything PCM was the only way to go.

In use, this bespoke BDP-83 is undeniably accomplished. Video quality is excellent, but it's no different from the standard BDP-83. There's copious fine detail and a solidity to its images, which is reassuring, but as you might expect, there's no provision for playing 3D material.

The setup menu offers a fair amount of control over image quality. In addition to brightness and contrast, you can also manage the levels of detail and edge enhancement, noise reduction, etc.

Perhaps more intriguing are the output options associated with the HDMI feed. The player uses Anchor Bay VRS deinterlacing and you can also apply CUE-Correction to remove Chroma Upscaling Errors. Of course, in most instances, the Auto setting is the best overall option, but at least cinephiles can feel smug that their player offers more than the mainstream competition.

So what of the player's audio performance, I hear you ask, and specifically the quality of its analogue PCM output?

For my main audition, I disabled all audio over HDMI and laced up the main stereo phono output with some heavy-duty Monster interconnects. One of my most revealing hi-res platters is by Emi Fujita. Called Camomile Best Audio, it's a Japanese SACD recording of MOR covers, with a stunning mid-range presentation.

Delivered via this NuForce special, Fujita's vocals sounded absolutely beautiful, never more so than with a luxuriously unplugged version of Walking in the Air. Stereo imaging is extremely precise, with an airy grace that goes a long way to justifying the ticket price. Once I started to listen, I didn't want to stop.

Are the new Sabre DACs better than high-end solutions from Burr-Brown? Unable to do specific A/B comparisons, it's impossible to say for sure. However, I found the deck to be deliciously precise, with an upper mid-range of crystalline clarity.

When it comes to bitstreaming out DTS-HD MA over HDMI, the performance onus inevitably shifts from the player to the decoding electronics, but there are no issues here with timing or musicality. Lou Reed's Berlin (Blu-ray) is a wondrously atmospheric live concert shot by Julian Schnabel at the St Ann's Warehouse in Brooklyn, 2006, and the Oppo revels in Reed's nuanced, mellifluous performance.

The bottom line is that this is a superb disc-spinner. Built on an already fine chassis, it delivers spectacular analogue audio from both high-resolution discs and standard CDs. It's even obliging when it comes to MP3s over a network.

Of course, at £1,300 it's an indulgence, but if you're in the market for a Blu-ray player that can hold its head up high in the company of dedicated high-end CD players, there's nothing wrong with that.

Oppo's Special Edition BDP-83, modified by Californian specialists NuForce, is an intriguing proposition. If you want a BD player for audiophile music playback that doesn't cost silly money, it's an essential audition.