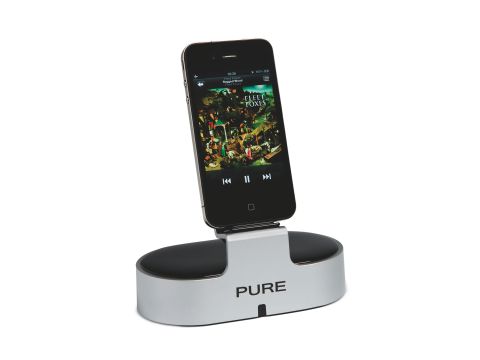 The Pure i-20 offers incredible sounds for the money

The iPod transport, a dock that extracts a digital signal to output to an external DAC, has been with us for a few years now and the price of models has drifted progressively lower.

From the £2,000 MSB iLink (which only worked with a specially modified iPod), we now have the Pure i-20 which will function with any iPod connected to it and will produce the all-important digital signal for a princely £80.

If this was the only feature the i-20 offered, we would be fairly impressed. Pure has other ideas, however. The i-20 will also take the digital signal it extracts from an iPod and run it through an internal Cirrus 4353 24-bit/192KHz-capable DAC to a pair of analogue outputs.

Pure claims a 105dB signal-to-noise ratio which is more than respectable under the circumstances. To add a final ribbon to an already appealing bow, the i-20 will output composite, S-video and component video (the latter two formats via special cable) to show video material from an iPod.

In short, this is an incredibly well-specified device for the asking price.

This very comprehensive feature set is concealed within a relatively plain exterior. The i-20 feels solid and well thought out, but it would be stretching matters to call it attractive.

The supplied remote is easy to use and works well from reasonable range, but the small size and slim design will likely condemn it to a life down the side of a sofa cushion if you're not very careful about where you put it down.

On balance, these minor aesthetic grumbles are worth the trade-off for the remarkable feature set and the effort that has gone in to making the i-20 as slick to use as possible. We tried the i-20 with a variety of iPods and found connection was instant with all of them.

Connecting an iPhone with the phone network still active produced no cellular ticks and buzzes, even when the phone was called while playing back in the i-20.

One minor bugbear is that the output level of the iPod in part decides the analogue output of the i-20. Unless the iPod is set to full volume, the i-20 will not produce the posted output voltage.

This isn't a huge problem when the iPod is in the dock, but unless you remember to correct it before reverting to headphones, there is the potential for a brief but ear-frying burst at maximum volume level.

These operational gripes can be forgiven because where it matters, the i20 is an assured performer. Initially connected by the analogue outputs, the i-20 produces a clean and engaging sound. Lossless files ripped from CD via iTunes retain the same sonic character as the original and the internal digital to analogue conversion of the i-20 is the equal of a well-sorted, sub-£250 CD player.

Vocals are well presented and instruments sound believably real. Very complex pieces can find themselves becoming slightly muddled with less separation between instruments and musicians, but the i-20 is never unpleasant to listen to.

Connected to an external DAC – in this case we tried a Cambridge Audio DacMagic and an Audio Note DAC1 – the Pure is essentially transparent and the overall sound quality will come down to the DAC used.

As might be expected, both DACs offered greater insight into the same lossless recordings over the analogue outputs but for those on a budget, the i-20 would be a respectable performer on its own before adding a DAC at a later date.

As a final additional talent, the i-20 displays a good-quality video image over component, even when blown up on to a 42-inch screen.

In terms of the performance offered and the potential for upgrade, the i-20 has to be considered a bargain. Anybody building an entry-level system around an iPod will find the i-20's ability to perform more than credibly on its own, before offering a simple upgrade via any one of the many DACs now on sale, very appealing.

We would have been delighted to see a bare minimum iPod transport at this price, so what Pure has achieved with the i-20 is remarkable. iPod hi-fi has never been so obtainable.