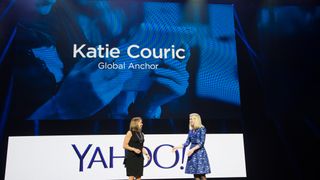 It may as well have been called "Marissa Mayer and her celebrity friends at CES."

"I would love to be big on the internet, but I am not a cat who has had a bad day," "Al" lamented.

The effect was a crisp, clippy and entertaining keynote, one that offered a break from the drolling product descriptions that can often send attendees into sleep.

However, there were a number of announcements that Yahoo wouldn't let slip through the cracks. They all revolved around a theme Mayer set early in the keynote: to make daily habits entertaining and inspiring.

Mayer started the show by noting Yahoo now has 400 million monthly users, a number she used to support the company's positioning of "mobile first."

She announced Yahoo's acquisition of Aviate, an app launcher that automatically organizes users apps and surfaces what it determines to be the most relevant ones.

Mayer offered no information as to the fate of Aviate, and instead brought out Couric to talk about how news consumption has changed since she got in the biz over 30 years ago. It was all a segue to discuss a new Yahoo app called News Digest, which curates news from various sources and presents it in a "comprehensive, complete and easy" way.

News was by far Yahoo's strongest pitch at the keynote, and the company also launched two new Digital Magazine properties - Yahoo! Food and Yahoo! Tech - during the course of talk.

Yahoo also introduced a new Smart Guide feature for its Smart TV interface, a place to "bring all your content together in one place." It seems like a simple enough addition, and Yahoo moved quickly off the topic of why video matters in this day and age.

He revealed that native ads are coming to the service, powered by its parent company Yahoo. It's not a big move for consumers, but one that brings one property Yahoo has purchased further into its revenue stream.

Yahoo saved the best for last, and no it wasn't SVP Advertising Technology Scott Burke talking about advertising options.

Singer John Legend serenaded the crowd, sending them off to the CES floor with a wink and a bow.