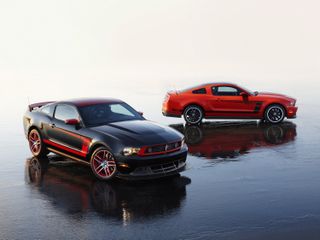 Ford's new Mustang is so fast, you need two keys to make it work

Firstly, we take the Weird tech bus to Japan, a nation often - and unfairly, we think - associated with pointless, sexist inventions. It's also where you'll find the Tourist Bra, an outfit designed to make Tokyo more attractive to tourists.

The wearer's skirt also unfolds to become a map complete with magnetic models of tourist attractions, while pressing down on the bra cups plays the message "Welcome to Tokyo!" in both English and Japanese.

ALL THE SIGHTS: Reuters discovers the tourist bra, designed to boost the economy rather than the wearer's assets

Sticking with Japan for a bit longer, we turn to one of the pressing issues of our age: when will single-celled organisms be able to beat us at Scrabble?

BACT AT YOU: If bacteria can solve Sudoku puzzles, it's just a matter of time before they're driving cars [Image credit: Jelte / Wikimedia]

That day draws ever nearer, my friends, because E.Coli can now crack Sudoku puzzles. Students at the University of Tokyo programmed bacteria to solve puzzles, although you need 81 types of bacteria to solve a 9x9 grid.

See how they run

Ford's latest Mustang Boss 302 has a secret: if you use a second, red, key you can turn the muscle car into a demented track day screamer, altering over 200 engine parameters, boosting torque and delivering an impressive 444 horsepower.

Such videogame-style power-ups are increasingly common, and we fully expect the next Kia Venga to contain a secret Pipes game that you can unlock to fire live bees at your enemies.

We have to be honest. Some art leaves us cold. What's the point of it? We ask. What is it trying to say? We ponder. Is the café open yet? But other art is so obviously, fundamentally right that it needs no explanation.

GRASSY: This is called The Open. We'd have called it GRASS! IN YOUR FACE! That's why we're not artists

Art like The Open, by Mattia Casalegno. To some, it might look like a helmet that presses a bit of turf against your face for no good reason, but to those in the know it's a "sensorial wearable device [that is] about the quality of sound to define a territory." We'll take three!