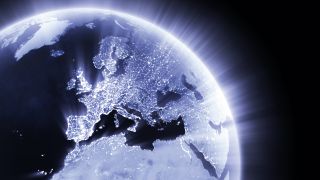 No witty caption can make light of Syria's violent blackout

In a nationwide web blackout today, the country of Syria disappeared from the internet.

Networking firm Renesys reported that at 12:26pm local time all 84 IP address blocks assigned to the country went offline, making internet communication in and out of the country impossible.

A BBC report indicated that Syrian phone lines are also effected, with only intermittent service in some areas.

US-based Akamai Technologies and Google have both confirmed that all internet services in Syria are inaccessible.

The Syrian government has blamed the blackout on "terrorists," however as more information on the blackouts surfaces responsibility is pointing more toward the government or a pro-government group.

Five hours after the blackout Renesys updated its report with the discovery that five Syrian IP networks are still in operation and reachable by traceroutes. The five networks are believed to be centered offshore rather than within the country so as to avoid a blackout such as this one.

Among the five networks are IP webservers that in May were implicated in malware attacks against Syrian activists and rebels.

Syrian activists communicating with those outside of the country via satellite phone have indicated that the government has used similar, but more localized, blackouts in the past as a precursor to military operations.

Internet blackouts are hardly the first hardship suffered by the civil war-torn country.

Reports from the Syrian Observatory for Human Rights indicate that amid the internet outage fighting has broken out in Damascus. The fighting is taking place in southern parts of Damascus near the city's international airport as rebels gain ground.

Damascus, President Bashir Assad's base of operations, has been at the center of the Syrian conflict.

As it appears likely that Assad's government is responsible for the blackout, it is following tactics used by the Egyptian and Lybian governments during last year's rioting.

A wide scale blackout is considered a tactic of desperation, as it hinders communications for both sides of the conflict.