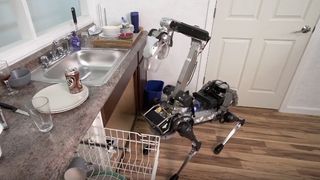 Aw, look! A cute robot that helps around the house, does prat falls on banana peels, wants to be your pet and may still kill you in your sleep!

It's just the latest from the folks at Boston Dynamics, the robot firm recently put up for sale by Google. Its newest creation is called SpotMini, a 55-pound, four-legged machine that's more large dog than cheetah. (SpotMini is smaller than Spot, Boston Dynamics' other robot pooch).

SpotMini features an extendable neck and clamp-like jaws that help it perform tasks like picking up glasses to put in the dishwasher and chucking a can in the recycling bin. It does take the occasional spill on discarded fruit, but its neck is there to help it get upright again. It's a skill that will give you only minor nightmares.

Boston Dynamics says the all-electric SpotMini is one of the quietest robots it's built, and can go for 90 minutes on a single charge, though time will vary depending on what it's doing. SpotMini performs some tasks autonomously, but humans can step in for "high-level guidance."

Are small, household robots like SpotMini the wave of the future? Watch the video below and decide for yourself: