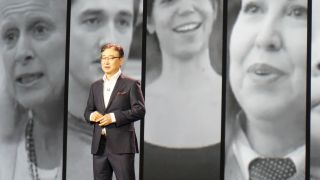 Samsung paints a vivid picture of their future at CES 2015

Imagine waking up to your smart TV providing you a daily news brief and weather automatically - just by sitting up in bed. Or how about listening to a podcast through headphones on your commute only to have it pick up where you left off on a set of wireless speakers as you walk through your front door. Pretty cool, right?

Now, imagine that same TV telling you what should watch before bed, or a pair of smart glasses calling 911 for you after sensing "abnormal" brain activity. This is all a vision for the future, the very near future, that Samsung CEO B.K. Yoon evangelized during his CES 2015 keynote address, and it will be possible through the Internet of Things.

If you're unfamiliar, the Internet of Things, or IoT, is a movement in the tech space to create a personalized network of any and all ordinary objects-made-smart ones through three key things: sensors, processors and connectivity. And Samsung seems to be taking this opportunity more seriously than anyone.

Frankly, while Yoon didn't pull the curtain back on any shiny new gadget, he conjured up a strong World's Fair feeling that I haven't experienced during CES in a long time.

"We can't just talk about the Internet of Things like things, because it's personal, like a bedtime story," Yoon said. "It has the power to transform our society, our economy and improve our lives."

But through those same big picture ideas, it was tough not to feel a bit Orwellian walking out of the convention center, either.

Yoon is on a mission, he told a few hundred journalists, analysts and tech enthusiasts in a massive Las Vegas conference hall, to have every Samsung product be a smart one. In fact, he promises just that in five years time: Samsung will be a 100% IoT company by 2020.

It works out for Samsung especially so, considering the Korean firm has its hands in nearly every kind of consumer tech imaginable. However, Yoon was keen to point out that he's not interesting in Samsung holding all the cards. He claims to want an open ecosystem through which any and all IoT devices can communicate.

That's part of the reason why Samsung has partnered with the likes of BMW to create platforms and apps for its devices to work with its smart cars, like the Samsung Gear S and an in-car tablet experience that BMW SVP Elmar Frickenstein revealed on stage as BMW Touch Command.

Samsung hasn't stopped there, recently acquiring cloud-based smart home tech startup SmartThings to further its vision. And with it comes partnerships with dozens of IoT companies ready to hop on board.

But thankfully, Samsung doesn't seem to have horse blinders on regarding our connected future. The company claims to be looking at this from every angle, realizing that there are still many questions that need definitive answers before IoT truly takes off.

Even a connected toaster could be deadly in the wrong hands

That's where President of the Foundation of Economic Trends Jeremy Rifkin comes in. Rifkin helped the audience come down off of Yoon's Jetsons-like high with a sobering message.

"Closing off avenues to this technology goes against the capability of the system," Rifkin said, alluding to the much-needed rancor surrounding issues like net neutrality. "Making sure no one is discriminated against is crucial to the success of the Internet of Things."

Rifkin also expressed concerns that everyone in the audience was likely feeling: security and privacy. We've all seen how movies like 2001: Space Odyssey and Minority Report turned out.

"We need to ensure a common set of codes, regulations and standards for interoperability in an open system," Rifkin warned. "We need to build resiliency and redundancy into the IoT system to safeguard against disruption and destruction."