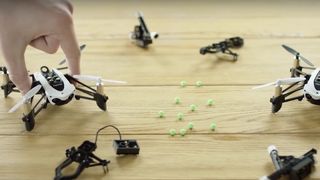 Has flying drones lost its thrill for you? What if there was a way to bring some of the fun back by, say, shooting small objects at people?

Parrot's angling for just that with its Parrot Mambo minidrone. We first told you about the pellet shooting, grab claw quadcopter in July, but now we have word that it goes on sale next month for a reasonable price.

The Mambo is a tiny thing - it only weighs 2.2oz on its own - but it includes two accessories that will delight you/annoy everyone around you.

The first is a cannon that lets you shoot pellets at a range of up to 6.5 feet (2m). You're not going to take down enemy aircraft with it, but it lets you pop bubbles and bother your friends, which has a joy all its own.

Mambo's other included accessory is a grabber that lets you do things like carry a note or drop a cube of sugar into your coffee (extreme!). Not included but available for an extra $15 (about £15, AU$20) are two LEDs for "nocturnal missions."

Though it's puny compared to Parrot's fixed-wing Disco drone, the Mambo can fly at speeds of up to 18mph and has a neat "throw to take-off" trick where its engines engage after you've tossed it into the air.

Parrot is also launching its Swing minidrone next month for $139 (about £110, AU$135), a price that includes the Parrot Flypad, a new dedicated gamepad for the fliers.

The Swing looks like an X-wing Starfighter, and Parrot says it's the "first plane minidrone which takes off and lands vertically." It will basically rise straight up using its four propellers, then turn them horizontally so it can fly forward. When it's ready to land, it switches back to quadcopter mode to bring it down in a straight line.

Capable of reaching the same 18mph speeds as the Mambo, the Swing can perform a bevy of aerial acrobatics, from U-turns to half-flips to loops. It also features autopilot in plane mode to keep it at a steady altitude.

Both drones can be flown with the Flypad (sold separately for the Mambo at $39/about £30, AU$55) along with a new dedicated app, the FreeFlight Mini.