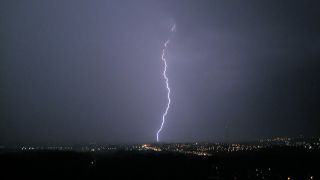 Lightning researchers at the Hebrew University of Jerusalem in Israel have developed a laser system that could be used to channel lightning bolts away from easily-damaged targets.

Normally, when a powerful laser is shot through the air, it leaves a trail of plasma in its wake. We don't normally see that plasma, because it only lasts a few nanoseconds, and it's less then a hundredth of a hair-width wide. After that, the trail disappears.

A Factor of Ten

Because the plasma trail conducts electricity, that means it can serve as a channel that lightning can move along. But a few nanoseconds isn't long enough for that process to happen.

By firing a second laser along that trail, however, the plasma is kept hot and its duration can be extended by more than a factor of ten. That's now long enough for it to be used to redirect a lightning strike.

"The beauty is that you can extend it for pretty much as long as you want, as long as you have the proper optical set-up and a laser beam with enough power," said Jenya Papeer, who's planning to present the work at an optics conference in October.