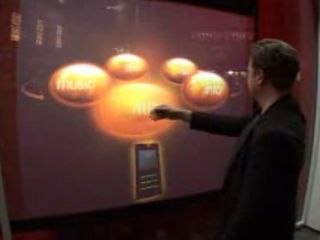 The screen is located at Orange's store in Carnaby Street, London

With all the gesture-based interface musings trumpeted by Intel and Microsoft at CES, you'd be forgiven for thinking it was light years away. Not so - one has just been installed at Orange's London Carnaby Street retail store, would you believe.

The innovative display needs no controlling device and works simply on movement using motion capture technology. As a result, it can be kept safely behind Orange's plate glass window, distinctly separate from 4am kebab remains and other morning-after indications of our binge-drinking society.

The screen enables passers-by to select news courtesy of ITN as well as film clips and music videos to promote Orange's services. The idea is that people can interact with Orange even when the shop itself is closed. You can see for yourself with a YouTube video of the screen in action - it seems to be drawing quite a crowd.

No need to touch

The Alternative is the name of the marketing agency responsible for the display which uses a large projection screen.

"This really is the next generation of the user interface. We wanted to throw out all the traditional ways of interacting with technology and start from scratch," says Gavin Martin, creative director of the company.

The Alternative says that one of the most impressive features isn't a technical one - it's the way the window turns even the most reserved person into a piece of street theatre.

"Because it requires movement it's very intuitive - it's great fun," added Martin.