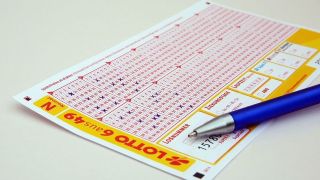 It's everyone's not-so-secret fantasy: win the lottery, quit your job, and move to Aruba. Or, maybe that's just me.

Tonight's US Powerball lottery drawing is for a record $1.5 billion jackpot, though according to Donald Ylvisaker, Professor Emeritus of statistics at UCLA and contract statistician for the California lottery, your chances of winning are slim, to put it nicely.

"The way I would think about it is if you take the US and drop off Texas, you're choosing one person out of the rest of the US population," Ylvisaker said. That puts your odds of hitting the jackpot at one in 292 million.

Ylvisaker's job with the lottery is to monitor the drawings and make sure they're honest, but I wanted to find out if there's a way a machine could ever accurately predict winning lottery numbers. With machine learning advances accelerating rapidly, could one ever become smart enough to pick the winning numbers? Does one exist even now?

"I am confident the answer is no, no such machine exists," Ylvisaker said. Drat.

It's still a game of chance

The secret sauce to a lottery - an up-and-up one, at least - is randomness. For each drawing, the lottery Ylvisaker oversees picks one number generating machine out of 10 to use. The Powerball numbers are randomly selected by two identical machines pulled from a group of four.

Ylvisaker explained that because different machines are used, you could never gain enough experience about how lottery numbers are drawn or gather enough data to use in a machine-learning context.

In order for someone to begin learning enough to build their own lotto number-predicting device, they'd have to conduct "a few billion trial runs" on one of the lottery's machines, and Ylvisaker politely noted that's just not going to happen.

What's more, the sheer amount of data it would take to attempt to predict lottery numbers is prohibitive.

"I don't think there's any way anyone is going to come close to that. You just can't generate enough data."

The average person may not be able to, but what about a supercomputer, one that can crunch petabytes of data?

The problem is that as advanced as machines have and will become, they still wouldn't be able to crack the prevailing factor of utter unpredictability.

"Lotteries are thousands of years old," Ylvisaker said. "Everybody is using chance - rolling the bones. Now, they use it in a very sophisticated way."

Machine learning depends on the collection of data, utilizing it to generate algorithms and make predictions based on patterns, but you simply can't accumulate enough data from lottery machines or their algorithms to do so. Plus, there's that tricky little thing called chance built right into the system.

"The worst thing you can have for a lottery for is for someone to know the numbers, so there are several layers of randomness," Ylvisaker said. "If you can track that down in real-time, that's quite an undertaking. Machine learning relies on gathering data, and you don't have all that data [for the lottery]."