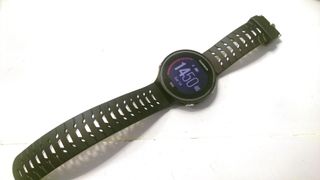 The Garmin Forerunner 630 might not sound like much. Another upgrade to a running watch line that's already been upgraded a few times in recent years, using the same interface and still, well, just telling you how fast you've gone.

But what if I told you that same watch had the ability to monitor you during your runs and actually discern the fastest pace you can manage during a race without dying? That's what Garmin has done here.

The press release for the 630 was pretty standard. The same as the Forerunner 620, but with a few added bits of physiological tracking.

The heart rate monitor can now tell you when you're a bit stressed, can tell you whether you're wasting energy by bounding too high, and let you know whether you're favouring the left or right side of the body - all tested out on my run with Garmin's running specialist.

But there was also something a little bit different in there: the ability to monitor your lactate threshold. That's an interesting one (and I'll explain why in a moment) as the only way to do this previously was to have your blood taken at regular intervals while doing increasingly harder exercise testing. How could a watch manage the same thing?

Before we get to that though, let's talk about the design. As someone who's used the Forerunner 920XT for the last seven or eight months, I'm pretty versed in the Garmin way of doing things. The first thing: the watch I use day to day is a tank. I'm used to it, but people tell me all the time that it's oversized.

But the 630 looks a lot sleeker - partly helped by not needing to track as many activities. But apparently the battery life should still be good - I love the fact I can run five to six days in a row before charging the 920XT, and that should be mimicked here.

And that includes all the fancy features that the new Garmin watches offer: connected to your smartphone, you can get notifications on your wrist, have your activity tracked (sleep and steps) and have that all uploaded to the attractive Garmin Connect app.

The screen looks to be about 40% larger, keeping the same footprint as the 620 but extending the edges of the display to allow more room to hit the touch panel. I've used a touchscreen extensively when running with the Adidas SmartRun, but I still much prefer pressing a physical button to do things.

After two days, I'm still not in love with having to touch the display to interact with the 630, as I've had loads of mis-presses just browsing through the menus.

Anyway, ENOUGH OF THAT NORMAL STUFF THAT I USUALLY WRITE AND ONTO THE BIT I'M REALLY EXCITED ABOUT.

The lactate threshold part of this watch could be a game-changer. As I said, the only way in the past to get the information about how much lactate in the blood was constant blood testing - and that's not fun.

Why is this information so important? Well, lactate is created when you begin pushing your muscles. It was previously thought of as waste, but now it's been proven to play a crucial part in making more energy. However, there's a point where more is being made than your body can deal with - and when you hit your lactate threshold, you start to tire rapidly.

Runners will recognise this as the 'blowing up point' or 'bonking'.. other might know it as the 'OH CRAP I'M GOING TO DIE' feeling when they're closing in on the end of a race. It might be partly mental, but there's definitely a tipping point physically.

So how can a heart rate monitor do that? Well, Garmin's Product Manager for the UK, Shane Harman, told me that it had been working with Finnish laboratory Firstbeat to use the lab's work on heart rate variability.

The theory is pretty simple: your heart beats differently from one pulse to the next - this is a good thing, don't worry. However, as your body gets more stressed and tired, that variation increases - so with some analysis, Garmin has worked out how to tell how stressed your system is, allowing you to know if you're overtraining or not.

Other firms have been doing that for a while - but the same studies into this variability found something interesting: apparently you can pinpoint when you're hitting lactate threshold through the same method.

Not only that, the watch can forewarn you when it's about to happen - so from the off, the Forerunner 630 will be able to tell you your lactate threshold speed. Or, for the layman: the fastest speed you can possibly go without over-exerting yourself. It can tell you how to run as fast as possible and finish the race strongly.

Think about that for a second: if you've ever done a race, you'll know the hardest thing is working out how fast you should go, especially at the start. You get an idea from loads of training - but what if your watch could tell you the same thing? That would be immense.

If Garmin gets this right, it's game-changing. The firm is confident - so much so that it's even got a gauge that will drop over the course of the race telling you how you're doing in terms of physical shape. In short: it can show you your internal fuel tank while racing.

The only downside for me is that I picked this up on Thursday, and I'm running a half-marathon on Sunday - and it needs a few hard runs (and, ideally, a stress test run) to work out the official pace and heart rate you can run at without blowing up.

There are a few things that disappointed me slightly: the threshold doesn't change over the course of the race, rather analysing run after run, cross referencing your heart rate data to learn your body accurately.

However, this a new level of monitoring, and the performance gauge during the race will be amazing no matter what.

Time to get training and see how fast I can get…