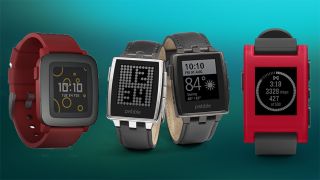 Don't skip these Pebbles in the pond

With each new model released, the Pebble has gradually become more useful and remains the smartwatch by which others are judged.

But with stiff competition like the Apple Watch looming on the horizon, is the latest model necessarily the best of the bunch? Count on TechRadar to break it down for you.

Part of the secret to Pebble's long battery life lies in the decision to utilize an e-ink display with an LED backlight capable of being activated with the flick of the wrist or the push of a button, which also remains perfectly readable even in direct sunlight.

That display didn't change all that much with the first two generations of Pebble hardware, with the original and Pebble Steel offering a 1.26-inch screen packing 144 x 168 pixels. The company hasn't provided detailed specifications for the new Pebble Time model, although it appears to offer a screen with the same basic dimensions and resolution.

The big difference, of course, is that Pebble Time features a color e-ink display that remains "easy to read and always-on," without the vampiric battery drain of the LCD and OLED screens used by competitors - and most importantly, lasting up to seven days on a single charge, just like the earlier models.

Pebble Time also upgrades the scratch-resistant optical hard coating used on the first two models to a more robust lens made from Gorilla Glass. All three models are water resistant to 50 meters, but the company does not recommend talking to your Pebble Time while underwater.

The original Pebble wasn't exactly what you would call a stunner, with a 52mm x 36mm x 11.5mm casing that looks downright pudgy compared to later models. Weighing 1.34 ounces, the smartwatch that started it all is available in five colors: Orange, Cherry Red, Jet Black, Grey and Arctic White.

Things started to get interesting last year with the release of Pebble Steel. Although only available in Brushed Stainless or Matte Black colors, the sequel looks downright sexy next to the original model, with a more svelte 46mm x 34mm x 10.5mm casing, despite weighing slightly more (1.97 ounces).

Pebble Time has further refined the appearance with a more streamline look, first offered in Kickstarter-exclusive Black, White or Red with complementary PVD stainless steel bezels ("extra special engraving" is also available for original Kickstarter backers). Thanks to the curved design, Pebble Time seems less rugged than either of the earlier models, but slims down by 20 percent to just 9.5mm with a more wrist-friendly, curved ergonomic frame.

All three Pebbles feature a standard 22mm watch band: Polycarbonate for the original model, leather for Pebble Steel (with the option to purchase a metal band) and soft silicone on Pebble Time. New models include a quick-release pin for swapping in a new band in under 10 seconds, and Pebble plans to publish 3D data to allow do-it-yourselfers to create their own straps.

The basic Pebble mission has remain unchanged across three models: To provide "glanceable notifications" for incoming emails, texts and other messages pushed from an iPhone or Android smartphone connected via Bluetooth 4.0.

Rather than embrace touch, all of the Pebbles are controlled by four tactile buttons: One located on the left edge which essentially acts as a home button, and three at right (from top to bottom, up, select and down). All three models also include a 3D accelerometer and compass built-in, and charge via USB with an included cable that magnetically attaches to the side.

Pebble Time introduces a couple of big improvements, most notably an integrated microphone that can be used to reply to incoming notifications or take short voice notes. Out of the gate, this feature will be the most useful for Android owners, thanks to compatibility with SMS, Hangouts, Gmail, Facebook Messenger, WhatsApp and more; iPhone users will be limited to Gmail notifications only at launch.

Last but not least, Pebble Time features a "smart accessory port," which the company says will allow hardware developers to build "sensors and smart straps that connect directly to the watch" in the future.