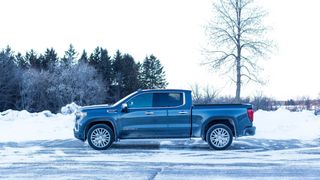 Is a heads-up display (or HUD) really that important for modern drivers? Once found only in sporty cars like the Chevy Corvette, the see-through floating display that appears above the hood is now available in many crossovers and even the 2019 GMC Sierra Denali 1500 4WD Crew Cab I tested recently.

It’s not exactly a technical wonder – a projection shines up on the windshield as you drive – but the data in an HUD has changed in recent years. In the future, an HUD might become the primary display we use, if we can adjust our senses to it.

The GMC Sierra shows current lane-keeping data, speed, GPS direction, and even offers a mode where you can see the incline of the truck as you drive, which is especially helpful for off-roading and climbing hills. What really sets it apart, though, is that the HUD looks about 8-10 inches wide and matches the awesome size of the pick-up truck itself.

This is more important than it sounds. In some cars, an HUD is actually annoying because it obscures your view. Adding more info, particularly for lane-keeping, just makes the display look even more cluttered and causes more distraction. In the Sierra, the windshield is so big that you don’t mind having the extra visual data to help you drive and as a safety feature.

In my test, for example, the lane-keeping info was invaluable. In the HUD, you can see when the truck is centered by glancing at the green lines that appear on both sides of your virtual truck in the HUD. It’s almost like a video game, but it’s useful because a truck is so massive that it’s sometimes hard to know if you're centered in the lane.

If you've enabled cruise control and collision detection, a virtual car will appear in the HUD as well showing there’s vehicle in front of you. It’s not quite a Tesla Model S, which shows a virtual representation that matches whether it’s a truck or car in front of you, but it is still helpful and unique.

The HUD mode that shows the truck incline (front-to-back and side-to-side) also shows which AWD and 4WD mode you have enabled, so you can use it as you drive over rough terrain.

In theory, if you start driving up a mountain pass that's getting a little too steep, you can stop and go backwards, and the HUD is the best place to look because you can keep your attention on the road. It’s also a good reminder about having 4WD enabled or not.

(The HUD doesn’t look that impressive in the photos; it looks much clearer, bigger, and useful when you're actually behind the wheel of the truck.)

As I mentioned, cars and trucks will one day display more information in the HUD, and it might extend much wider on the windshield. We’ll have to adjust to this over time, because having data for current music playback, speed, navigation, lane-keeping, and other settings all displayed at the same time in a long row might be seriously distracting.

Where it might come in handy is when cars become much more automated and even drive entirely on their own. We can glance at these displays when we want to check road conditions, but otherwise stay focused on typing on a laptop or even watching a movie.

For now, the 2019 GMC Sierra provides a nice mix--plenty of info on a large display, but not so overwhelming that it obstructs your driving or causes any distraction.