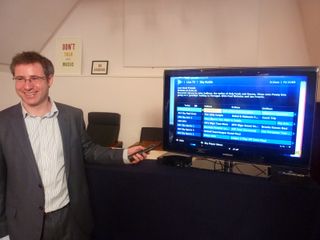 It is no surprise that IP Vision has decided to lodge a complaint. At the moment its Fetch TV service is one of the few around that successfully melds on-demand content and TV – precisely what Project Canvas wants to do.

In the complaint, the CEO of IP Vision Eddie Abrams says: "As a leader in this nascent sector in the UK, we are all in favour of healthy competition that benefits both the industry and consumers.

"However, this group of industry Goliaths, supported in part by BBC licence fee funds, will have the power to dominate the sector – even though what Canvas will offer will not be superior to solutions already on the market. Surely this can't be good for the UK television industry or for the consumer?"

Consumers will pay the price

IP Vision's Fetch TV is currently seen the "only provider of a complete end-to-end solution" for IPTV through a set-top box by the BBC Trust.

Fetch TV hit the news earlier in the year for being the first set-top box to offer Sky Player.

Abrams believes that when/if Canvas comes to the UK it will make the market uncompetitive, explaining: "If Project Canvas rolls out as intended, market competition, consumer choice and technology and commercial innovation will be stymied.

"The consumer will end up paying the price of an uncompetitive market in the form of restricted content, service and technology choice."

IP Vision isn't the only company to complain about Project Canvas, earlier this month Virgin Media lodged a similar missive to Ofcom.