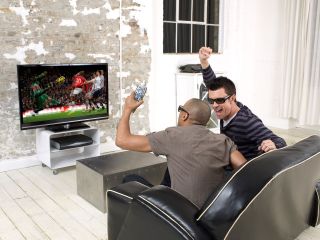 How to avoid tired eyes when watching 3D

Well-produced 3D entertainment is clearly a welcome addition to blockbuster Hollywood fare and TV sports and event coverage for most of us.

But a small number of people find 3D uncomfortable watch. So does the fact a small number of viewers simply cannot enjoy the experience concern 3D advocates at Sony, Sky, Virgin Media and other such companies investing heavily in 3D gaming, movies and TV services?

A recent academic study into the effects of stereoscopic 3D at the University of California, Berkeley goes some way to explaining the cause of headaches and eye fatigue caused by three dimensional viewing, with professor of optometry and vision science, Martin S. Banks, explaining:

Or, as renowned film editor Walter Murch explains the issue: "3D films require us to focus at one distance and converge at another. And 600 million years of evolution has never presented this problem before."

Elsewhere, stereoscopic 3D gaming is coming under fire from some in the games industry, even though around five million 3D TVs are estimated to be sold in the US this year (and 15 million next year, according to Futuresource Consulting), with that figure inevitably going to rise considerably as the prices of 3D-ready sets fall over time.

So can the imminent slew of quality Tinseltown 3D fare and new Sky 3D content, alongside games such as Sony's forthcoming Uncharted 3 for PS3 help to resurrect some interest and excitement around 3D amongst cinephiles, gamers, games developers and TV viewers?

We put these questions to Sony UK, with a spokesperson telling us in response that: "in recent years, there has been significant technological advancement in the field of 3D content creation.

"More content creators are making 3D images that do not force the viewer's eyes and brain to work too hard to compensate for differences between their normal way of seeing in 3D and the created images; thus offering a more natural and comfortable 3D experience to viewers."

In terms of discomfort, eye strain and nausea, companies such as Sony are always careful to cover their backs, with the Sony spokesperson quick to add that: "Safety guidelines are expressed in the instruction manual that comes with every Sony BRAVIA 3D TV and Sony recommends that all viewers take regular breaks while watching 3D video images or playing 3D stereoscopic games.

"The length and frequency of necessary breaks will vary from person to person. You must decide what works best. If you experience any discomfort, you should stop watching the 3D video images or playing 3D video games until the discomfort ends; consult a doctor if you believe necessary.

"The vision of young children (especially those under six years old) is still under development. Sony recommends that you consult your doctor (such as a paediatrician or eye doctor) before allowing young children to watch 3D video images or play 3D video games. Adults should supervise young children to ensure they follow the recommendations listed above."

When we asked Sky about these recent 3D discomfort studies and the apparent slow take-up of 3D TV, a spokesperson told TechRadar:

"Sky's focused on offering our customers the best 3D experience available. That's why we ask our content partners, as well as our own in-house production teams, to target the very highest standards of production. To help sustain this, we're investing in our own production teams, we're working with Skillset to train behind-the-camera British talent, and we're investing directly in 3D production, including most recently the BAFTA award-winning Atlantic Productions.

Sky's major competitor in the UK, Virgin Media, is also keen to promote its own 3D-on-demand offering to its consumers, with a spokesperson telling TechRadar: "3D is an exciting new format which adds a great new depth to shows and an incredible amount of realism.

"However, as some consumers may find, the new way of viewing can take some getting used to, so our 3D on demand service makes this simple by putting the viewer in control and is perfectly suited to anyone looking to enjoy 3D without being tied to a TV schedule.

"This way customers can get into the mood and make a real event of viewing 3D with family or friends, taking breaks as needed without missing a moment of the action."

The bottom line is this. If you happen to be one of the unfortunate minority of people who is more prone than most to experiencing discomfort from extended viewing of 3D movies, TV or gaming, then it's best that you learn to understand how often you need to take regular breaks in extended TV or gaming sessions to avoid getting these annoying headaches.