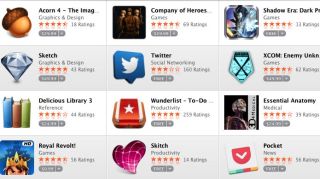 We've been anticipating big changes for Apple's iOS App Store for some time, and now the Cupertino company is set to reveal all at its WWDC event next week.

In an interview with The Verge, Apple's senior vice president of worldwide marketing Phil Schiller discussed how Apple will be opening its App Store subscription model, currently implemented in news and magazine apps, to all product categories. "And that includes games, which is a huge category," said Schiller.

The company's plans for the App Store's future also include a new revenue-sharing model, which will keep the current 70/30 split, but will see Apple's 30 percent cut drop down to just 15 percent once a developer has had a customer subscribed for longer than a year.

Display ads will also be making their way into App Store search results, which will provide prominent placement for app developers that are willing to front the cash. Schiller stated that the system will be "fair to developers and fair for indie developers, too."

The App Review process is also getting faster. Apple claims that 50 percent of apps submitted are now reviewed within the first 24 hours, with that number reaching 90 percent by the 48 hour mark.

Share functionality will also be built into every app's 3D Touch menu, allowing users to shoot off a link to their recommended app on social media channels.

Subscription models in iOS games and apps will surely please developers, who'll now have the option of using a brand new, recurring revenue stream to bring in the big bucks.

As for the consumer, they may be left with tough decisions on which apps they're willing to pay a monthly fee for. Juggling multiple app subscriptions could also be a headache, as being charged for several different subscriptions each month will start to add up. Consumers may need to become more selective about the apps they invest their time and money in.

That said, this could also lead to the cream rising to the top, forcing developers to up their game when it comes to putting out a product that's actually worth sticking with. If the latter holds true, that can only be good news for consumers.

If implemented well, it could act as a way to resuscitate waning interest in many apps — it may even inspire users to properly commit to apps rather than abandon them after a few days.

We're less enthused about display ads appearing in search results. However, we're willing to wait until see some examples before completely writing them off — they could make it easier for customers to get their eyes on apps and games they may have missed otherwise.