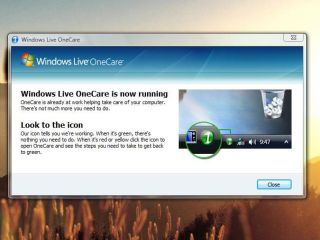 Windows Live OneCare will cost you a subscription fee, despite being inferior to AVG Anti-Virus which is free...

Microsoft software has once again come under intense scrutiny after its Live OneCare security program failed in a new series of reliability tests. Out of 17 pieces of security software tested by AV Comparatives , Windows Live OneCare was the only one to fail outright.

While security protection from the likes of Kaspersky , NOD32 and Norton were rated as 'Advanced' by detecting upwards of 97 per cent of threats , OneCare failed to achieve any rating at all, having spotted only 82.4 per cent of computer viruses .

In the test, the Austrian firm, which carries out similar tests every three months, attacked each program with 497,608 internet nasties in the shape of viruses, Trojans, worms and other forms of malware. The Microsoft security software failed to spot nearly 87,000 of the threats, leaving it languishing red-faced at the bottom of the pile.

Windows Live OneCare is an anti-virus suite developed in-house by Microsoft for use on its Windows operating systems.

It's the second time this month that the software has come under fire, after Virus Bulletin found that it failed to detect and protect against a reasonable number of common virus threats.

"Microsoft OneCare performed very low in the test, and did not reach the minimum requirements for participation," said Andreas Clementi, of AV Comparatives, in his report.