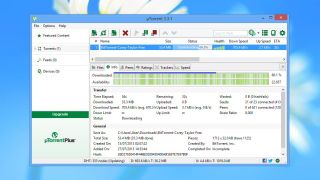 uTorrent is a lightweight but powerful BitTorrent client.

When it comes to choosing a BitTorrent client, there are so many applications that seem to do the same thing. How do you choose a good one?

How about a client built by the same team that developed the BitTorrent protocol? How about a client that takes up barely 1MB of hard disk space, and prides itself on elegant, efficient torrent downloading? That software is called uTorrent.

While other BitTorrent clients can be clunky or difficult to use, uTorrent has a clean UI and a clear set of useful options. Despite its small size, it still comes stacked with support for all the standards you'll need - DHT, SSL, SSL, UDP, protocol encryption, UPnP and more.

Better still, uTorrent doesn’t gobble up precious system resources or slow down other programs you have running. The software auto-adjusts the bandwidth based on your current usage.

The free version of uTorrent has some limitations. The paid version, known as uTorrent Plus, protects against viruses in downloaded torrents, supports more playback formats, encodes video and, crucially perhaps, doesn’t have any adverts, aka Featured Torrents. The downside is that adding these features will cost you $24.95.

The free version of uTorrent should be enough for most users and it should come as no surprise that uTorrent has become one of the popular torrent tools available. While we recommend it, keep an eye out during the installation and deselect any toolbars or extras that the program suggests that you install.

Get uTorrent for free