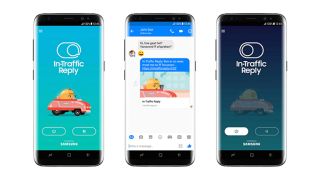 Despite all of us being told (many times over) that we need to keep our eyes on the road and our hands on the wheel when we're driving, every time a notification comes through on our smartphones, most of us still tend to get distracted. And study after study has shown that distracted drivers are one of the leading causes of accidents on our roads.

According to a survey commissioned by Samsung Netherlands, approximately a third of Dutch drivers occasionally use their phones while driving or riding a bike, with most respondents stating social pressure as a reason for immediately responding to calls and texts.

So, to combat this increasing threat to road safety, Samsung has developed an Android app – aptly named In-Traffic Reply – that helps drivers respond to messages without removing their hands from the steering wheel.

The app relies on a phone’s GPS to detect when a user is riding a bike or in the driver’s seat. And if a call or a text message comes through, an automated “I’m driving, so I cannot answer at the moment” message is sent back to the contactee.

The message can be customised – users can choose an animated image or edit the default message as they choose.

No mention, however, has been made as to how the app works if you’re just a passenger.

The app is currently in beta and is only available to Dutch users for the time being. If you live in The Netherlands and are keen to give it a whirl, you can sign up here. For anyone else wanting to try the app, an .apk file is also available for download from the SamMobile website. (SamMobile is a fan site and has no official affiliation with Samsung, so we'd advise caution if you're not familiar with sideloading apps in Android.)

The full version of the app is expected to be available on the Google Play Store starting mid-May.