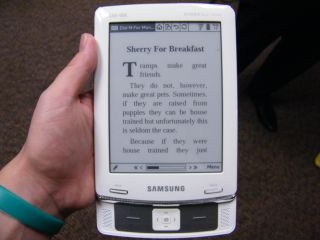 Samsung has announced the launch of its first eBook reader in the UK.

The Samsung E60 is a slightly modified version of the Samsung SNE-60K which hit Korean stores earlier this year, and goes on sale online at WHSmith for £199.99. It'll hit highstreet stores on August 26.

Samsung visited TechRadar HQ recently where we were able to have a little play with the E60, as well as the Samsung E65 which will arrive shortly with a built-in QWERTY keyboard.

Let's start with the specs then.

The Samsung E60 comes packing 2GB of internal memory - enough to store 1,200 books - an SD card expansion slot and 802.11b/g Wi-Fi. You'll be able to make use of this Wi-Fi connection to download books and newspapers from the WHSmith eBook store, as well as share content with other Samsung eBook readers using the Emolink option.

So far, so totally predictable then.

There's no 3G-version anywhere to be seen (we were given a 'no comment' response when we asked if a 3G version was forthcoming), while other 'me-too' features include handwriting functionality for annotating books, MP3 support for listening to music while you read, as well as support for all standard eBook formats including ePub, PDF and TXT.

This will appeal to those people who already have a large collection of eBooks in PDF format and don't want to repurchase.

Oh and there's also a text-to-speech option which will read books to your kids for you if sound parenting isn't your bag.

So what did we think of the E60? It's a tidy little piece of kit, that's for sure. It operates very much like a Samsung sliderphone in that the screen slides upwards to reveal more controls underneath.

It's also a very solid build, with a nice clear e-paper display (800x600) and it has a firm feel to it – you'd have to give it a real good shunt if you were going to break it which is vital if you're going to be taking this with you on the tube everyday.

To that end, it's also not too heavy, though it's still significantly larger and more cumbersome than your average paperback, that's for sure.

The interface is fairly easy to navigate too – it's very similar, in fact, to those found on eBook readers from the likes of Sony and Amazon – which means it also suffers from the same drawbacks...

Ebook readers only use power when you turn a page or navigate the menu system, so static pages use no power at all. That's ideal for obvious reasons – the battery will last for 7000 page turns - but the downside to this is that just like most eBook readers, it's just not very responsive.

Page turns are not instantaneous, there's a brief but uncomfortable pause between your page-turn request and the next page being displayed. We were told that the E60 is "more responsive" than other eBook readers, but we beg to differ - performance is comparable to all the other eBook readers we've seen this year.

This all brings us down to how much it costs. It's available at whsmith.co.uk from today for £199.99 which is a heck of a lot of dosh, if you ask us.

That's the same price as the Wi-Fi version of the iRiver Story, which is also available at WHSmith.

In contrast, the new Amazon Kindle is set to cost just £109 for the non-Wi-Fi version and £149 for the version with free 3G.

How Samsung, iRiver and the rest expect anyone to fork out 200 quid in the face of that, we just cannot fathom.