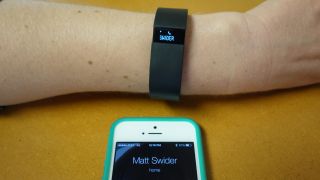 Some people have LITERALLY been itching to get a new Force

It's been a rocky road for the Fitbit Force, which was recalled earlier in the year due to complaints of skin irritation.

According to a leaked photo, Fitbit has updated the Force with a few small tweaks. The info was dished out by @evleaks, who said the refresh would come "later this year".

He also added that the rejigged Force will have a "new hypoallergenic band" and be "more waterproof".

The device looks mostly the same, but if the details on this picture are to be trusted then we'll also be getting Called ID and real-time run stats, the former of which was promised to arrive in an update just before the first band got recalled.

A spokesperson told us that the UK release date of the Force is still "to be confirmed", but we suspect that it won't be long after the US now that that Fitbit seems to have sorted the whole allergy problem out.