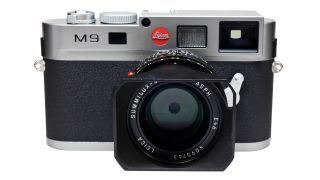 Leica M series cameras have almost legendary status among photographers. Even though they don't necessarily use the most cutting edge technology (just check the specification of the Leica M9 and Leica M Monochrom's LCD screens), their superb build and the excellent optical quality of M-mount lenses means that many photographers see them as the ultimate acquisition.

Their price, however, is quite staggering, especially when you consider that they are manual focus only and have none of the high-tech automatic modes designed to make the photographer's life easier.

So who buys them? Surprisingly, it's not just city bankers, lottery winners and rock stars (although they do make up a substantial section of the Leica members' club).

Leica Akademie tutor Brett says he regularly teaches photographers of more modest means who have saved for years to make their prized purchase, even taking on extra jobs to get the money together. He himself took a warehouse job as a teenager to afford a Leica enlarger, then after joining the Birmingham Post as a photographer at the age of 18, he saved his wages to buy a Leica M2.

There are also photographers who have gone without other luxuries for years to buy a Leica camera. It's a question of priorities. These devotees place owning a Leica M camera higher up on the wish list than foreign holidays or a new car, perhaps preferring to catch the bus to work rather than drive a BMW. For others it is their retirement purchase, a reward for a lifetime of work.

Then there are the professional photographers who buy a Leica M series model because it suits their style of work. They may want the quiet discretion brought by the mirrorless rangefinder, the depth of field control of the full-frame sensor, or the detail resolution brought by the combination of the sensor and the M-mount lenses.

The M-series has proven track-record and history with documentary and reportage photographers who like its small size, discrete style and quiet action, but it also finds favour among some wedding photographers. And there's no doubt if you shoot with a Leica it brings a certain cachet that can be reflected in the fees that you charge.

It's these same qualities, plus the history of the Leica brand, along with the second-to-none build quality, that makes the M-series attractive to enthusiast photographers. For some there may also be a little ego massaging involved. The fact that they use a camera that is likely to confuse the average novice and is beyond the reach of many gives them a certain sense of achievement and self-worth.

Speaking of his Leica Akademie courses, Brett (he doesn't use his last name) says: "The camera is a great leveller." Even the rock stars that attend want to be photographers while they are there, and everyone gets on united by the mutual appreciation of the camera and their desire to master it.

Of course owning an expensive camera brings its own problems. For example, it can pile on the pressure as the photographer feels the need to perform to justify the expense. As the M-series models enable you to concentrate on the most important elements of photography - the subject, exposure and composition - the photographer's skill is put to the test.

A Leica user needs to be prepared for his or her photography to be scrutinised and judged by those who cannot imagine or justify paying such a huge amount for a camera.

They also need to be brave enough to take such a valuable and portable object out onto the streets that it is designed to document.

So if you have been saving furiously, or you have just won the lottery, and you are contemplating investing in a Leica M9 or M9-P, bear in mind that it takes more than just money to be a Leica photographer.