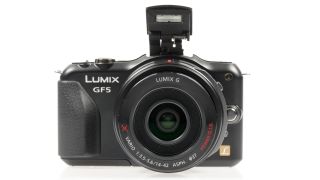 Is the new Panasonic GF5 better than the Olympus E-PM1?

Olympus' stylish compact system camera, the E-PM1, packs a lot of punch, but how does it fare against the new Panasonic GF5?

They share the same Micro Four Thirds lens mount and sensor type, but how many other similarities run parallel between these two CSCs?

Though not identical, these two cameras have a near match on their effective pixel count. The Panasonic Lumix GF5 has 12.1 million effective pixels, while the Olympus PEN Mini E-PM1 has slightly more, with 12.3million.

On both cameras, digital or 'Art' filters may be used while shooting, which adds more interest and creativity to the video.

There are large differences between the Olympus E-PM1 and the Panasonic GF5 where the flash is concerned.

The Olympus E-PM1, for example, doesn't have a built-in flash, but it comes with a detachable flash unit that attaches via the hotshoe - which can also accept other, more powerful flashguns should the need arise.The bundled flash can even be used to control other flashes wirelessly.

This enables the camera to use different levels of flash compensation for a number of lighting conditions.

The Panasonic GF5 has no hotshoe, but it houses a built-in pop-up flash and seven flash modes. This means it is less versatile, but of course there's less hassle.

The Olympus prides itself on the E-PM1's wide variety of shooting modes, including 24 different scene modes, some of which are the same as the Panasonic GF5's.

The Panasonic GF5 offers only one fewer, with a total of 23 shooting modes.

After jostling over creative ability, the Panasonic GF5 fights back with its choice of two standard kit optics (you can choose between a standard 14-42mm lens, or the newer, more expensive 14-42mm power zoom lens).

The Panasonic GF5 adds even more user interaction however, with its 3-inch touchscreen LCD monitor, which should make menu navigation and shooting adjustments quicker and simpler to use.

In terms of its physical handling, the Panasonic GF5 has a total weight of 362g with its standard kit lens included, while the Olympus E-PM1 stands at a featherweight total of 265g.

Both compact system cameras are close competitors for most of the way, branching off in certain areas such as ergonomics.

Overall both cameras are pretty evenly matched, with the Panasonic GF5 perhaps pulling ahead with its longer video recording time and higher resolution interactive touchscreen for a more creative handling.