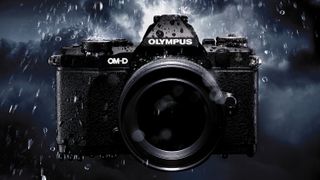 Olympus has three D-SLR style compact system cameras in its range and the OM-D E-M5 sits right in the middle. It's the one Olympus sees as its core model for enthusiasts, and because it was the first of the three it was the one most in the need of a refresh.

But this is much more than just a quick respray. As we first reported in our Camera rumors 2015 article, Olympus has indeed introduced a super-high-resolution mode based around a highly creative use of its in-built sensor-shift system.

This is normally used to correct the effects of camera shake by shifting the sensor to counteract any camera movement during the exposure. But Olympus has harnessed this technology to shift the sensor by microscopic amounts in a fraction of a second during the exposure to take eight separate shots which are then combined into a high-res composite image.

The sensor describes a tiny circular movement around each pixel (photosite), effectively adding 'in-between' pixels to the 16 million pixels hard-wired into the sensor.

Olympus's High Res mode is not instant, however. Each exposure takes a second, and the subsequent image processing adds another 2.5 seconds. It's designed for static subjects with the camera mounted on a tripod, and while Olympus is quick to quash any talk about it being a medium-format camera competitor, the company does say the quality rivals that of many full-frame cameras.

Interestingly, Olympus hasn't jumped on the 4K bandwagon with the E-M5 Mark II. But it does shoot full HD movies and the company is keen to show off the shake-reduction capabilities of the E-M5 Mark II's 5-axis shake reduction system, which can counteract yaw, pitch, roll, vertical shift and horizontal shift movements.

The E-M5 Mark II has an improved, second-generation version, and this can be used for both stills and video. Olympus played the assembled journalists a pretty impressive action short taken entirely on the E-M5 Mark II, completely handheld for both static and panning shots, and without tripods or gyro rigs. Olympus has also added multiple video frame rates to allow for different territories which was, to be honest, a bit of an oversight in the original E-M5, and quotes a maximum bitrate of 77Mbps, almost four times higher than its predecessor (the bitrate is a key part of the video quality).

That's not all. The OM-D E-M5 Mark II has a new, quieter shutter mechanism capable of speeds up to 1/8000sec, boosted to 1/16,000sec with the electronic shutter mode. This is designed for silence rather than fast action, though – the sensor 'scanning' process used takes around 1/20sec.

There are other important improvements too. It's the first OM-series camera with a fully-articulated rear screen – the others have a tilting screen.

And you'll also see a difference in the viewfinder. The E-M5 Mark II has a 2.36-megapixel EVF screen, which is almost twice the resolution of the original camera's 1.44-megapixel screen.

Let's not forget this is a seriously fast camera, too. The old version could shoot at 9fps, and the E-M5 Mark II ups this to 10fps – that's pro sports D-SLR territory.

Finally, there's a Quick Sleep mode that boosts the battery life from the normal 310 shots to as much as 750. Battery life is still a weak spot point in CSCs vs DSLRs, so it's good to see Olympus tackling the issue. With the grip and extra battery (see below) we're told this should double.

The OM-D E-M5 comes bundled with a new FL-LM3 flash that increases the distance from the optical centre of the lens for better lighting and reduced red-eye, and there's an HLD-8 battery holder and an ECG-2 grip which offers a headphone socket so that pro videographers can monitor sound levels.

Finally, Olympus also announced the development of a new 8mm f/1.8 fisheye lens which should arrive in summer 2015.

Olympus's 40-megapixel breakthrough is remarkable, though the shooting constraints of the High Res mode mean that doesn't directly challenge larger, professional cameras. Nevertheless, Olympus has found a way to conjour a massive jump in resolution from an everyday, affordable compact system camera aimed at enthusiasts.

The technology is still experimental, and it's still too slow for regular hand-held photography, but it's early days yet and this could be just the start – has Olympus found a whole new direction for digital imaging?