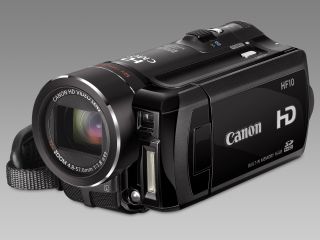 Canon has revamped its entire camcorder range with the launch of 10 new products right across the range - from the entry-level MiniDV series to the high-def HF series.

All four boast True Wide 16:9 recording for widescreen TV-ready filming, while Canon Advanced Zoom technology enables the MD235 and DC330 to extend to 45x - Canon's most powerful camcorder zoom to date. The MD205 and DC301 sport a 36x zoom.

However, it's further up the chain where things get truly interesting. While the FS100 is a new standard-definition camera that records to SD/SDHC cards, the all-new FS11 also offers the choice of recording to an internal Dual Flash Memory.

Over 10 hours of filming

According to Canon, the FS11's 16GB internal solid-state memory can accommodate over 10 hours of filming, with the option to store even more on SD/SDHC. Both cameras benefit from a 45x zoom.

The announcement of a new HV30 model is likely to cause excitement with digital video enthusiasts. Its predecessor, the HV20, was both a Digital Video magazine award winner and a best-seller in 2007.

Using the same HD Camera System employed by its predecessor, the HV30 records hi-def 1080i images directly to MiniDV and can be used with the Canon's high-capacity BP-2L24H battery pack for up to four hours of continuous HD filming.

At the business-end of things Canon has announced the imminent arrival of its HF10 and HF100 hi-def models. Both cameras offer 1920 x 1080 Full HD recording, with the HF10 able to count on 16GB of Dual Flash Memory for up to six hours of card-free capture.

The HF100 lacks the internal memory of its HF10 brother, but can record to SD or SDHC card. Both models feature proprietary image stabilisation technology, multi-angle LCD displays and double up as 3.1-megapixel still image cameras.