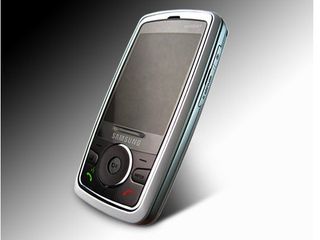 If you're looking for a smart phone with smartphone functionality then the Samsung SGH-i400 sliderphone could be just what you're looking for. Powered by the Symbian S60 operating system, the SGH-i400 sports a 2-megapixel camera, large 2.3-inch display, a built in MP3 player and expandable microSD card support.

The SGH-i400 has a full web browser onboard, although it doesn't offer 3G data speeds - it's a tri-band GPRS/EDGE device. It measures a pocketable 50mm wide x 101mm high x 15.8mm deep, and weighs 92 grams.

Stereo Bluetooth is provided on the SGH-i400 plus there's onboard stereo speakers. Samsung has also added a dedicated music player key.

The SGH-i400 joins a range of Samsung Symbian and Windows Mobile smartphones announced earlier this year. It will initially be released in Russia in July, and in other European countries shortly after.