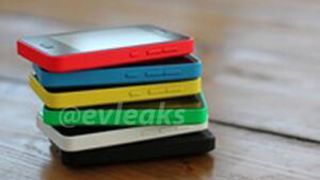 Nokia announced today that it will hold an event in New Delhi around noon (UTC) tomorrow, asking folks whether they're "ready to add some color to your week?"

Perhaps Nokia's post on its Conversations blog was meant to be mysterious, but a leak earlier today seems to have thwarted the Finnish phone maker's plans to keep this pigmented announcement secret.

That leak involved photos of a stack of devices referred to as the Asha 501, a new, tiny, budget phone from Nokia.

The Asha 501 appeared in an assortment of colors, including black, white, green, blue, yellow and red, a palette that reminds us of the Mighty Morphin Power Rangers.

The Asha 501's appearance today is courtesy of Twitter account @evleaks, which has a shockingly good track record with leaks.

It will come as no surprise if Nokia is gearing up to introduce new Asha devices tomorrow. Despite Microsoft and Nokia's Windows Phone 8 push, Asha devices still outsold Lumias in 2012. In fact, @evleaks even followed up with SlashGear that the Asha 501's debut will land "[t]omorrow, in India, actually."

Nokia has made a concentrated effort to up its budget phone game lately with devices like the Asha 205 and Nokia 206 debuting late last year, plus the super simple Nokia 105.

The Lumia line has been getting more affordable as well with devices like the Lumia 520, and Nokia execs have hinted that it could go even cheaper.

Stay tuned to see if yet another rainbow-hued budget Nokia phone makes its debut Thursday, though we're doubtful the phone will be available in the U.K. or U.S. to start. A live global webcast will hit the Conversations blog at 7:30 a.m. BST/11:30 PDT.