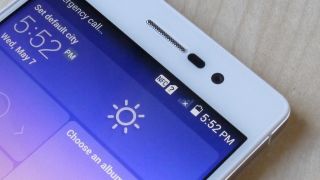 We've just found out that the LG G3 will sport a 5.5-inch, 538ppi QHD display, but Chinese manufacturer Huawei can't see the point of such a resolution on a smartphone.

TechRadar sat down with Huawei boss Richard Yu at the firm's Paris launch of the Ascend P7 to talk about the company's plans and the wider world of mobile tech.

The Ascend P7 features a 5-inch full HD display, bringing it in line with the other flagship devices of 2014, and Yu is happy to stick to that resolution for now.

"I don't think we need QHD displays on mobiles. Your eyes totally cannot identify between full HD and 2K on a smartphone. You can't distinguish the difference, so it's totally nonsense," Yu told us.

"We can [put a QHD display on a smartphone], but it's very bad for power consumption and it doesn't offer anything in return.

"You eyes cannot see the difference, so why should we do that? I think it's a stupid thing."

Yu also said that the higher resolution panels would add some additional cost to the handset, but the biggest issue was the increased power consumption.

Smartphone power consumption is a hot topic at the moment, with manufacturers aiming for one days use on a single charge. That's hardly the week of battery you'd eke out of a Nokia 3310.

Huawei is working on improving battery, although Yu admits that you're unlikely to hit a full three days on a single charge and he says "we need more time" before more than three days becomes a reality.

Several manufacturers are looking to tackle the battery life problem in a different way, introducing quick charging power packs that allow you to get a decent chunk of life back from just a short time connected to a plug.

Yu has a problem with this technology though, as he says it negatively "influences the life cycle of the battery," meaning your battery may deteriorate quicker over the lifetime of your phone. That can be especially troublesome if the battery is locked away under the chassis.

Unsurprisingly, Yu added, "we're in no hurry to implement quick charging on our devices."

Huawei launched its first wearable at MWC 2014 in February, with the Talkband B1 hitting the show floor with a removable earpiece allowing you to take a call without reaching for your phone.

It's worth keeping an eye on Huawei in the wearable space too, as Yu said "more is coming" from the firm in this market.

Although he didn't go into specifics, when questioned whether the firm is looking into smartwatch devices similar to Samsung's Gear range Yu told us "we have some projects which are ongoing. We're looking at everything.

"We're looking to make wearables into something meaningful, and to make the experience much better.

"Accessories are very important with smartphones, and they're all about making people's lives more convenient."

Is that a Huawei smatchwatch we can smell? Quite possibly.