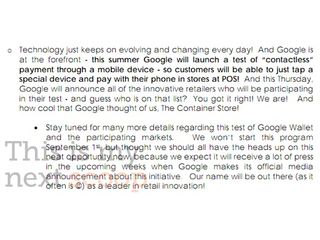 A leaked memo from a US retailer confirms that Google is launching a near field communications (NFC) payment taking plan, dubbed Google Wallet, at an event later today.

We already knew that the search giant has plans for NFC, particularly since it sparked a rush for Android manufacturers to include the necessary chip in a host of recent handsets by including NFC in its flagship Google Nexus S.

But now we know the name of the scheme – Google Wallet – and that it will be launching in the US this summer, with at least one big-name retailer, The Container Store, on board.

Other rumoured retailers to be taking part are Macy's and American Eagle, although it's not clear if the scheme will be US-wide or just in select cities.

It's also a safe bet that we'll see a few new NFC-toting apps pop up in the Android Market as a result of the new scheme.

There's no word yet on when, or indeed if, the scheme will make it to the UK, but we're hoping that Google will throw us a Euro-related bone at its event later today.

Don't forget to cast your vote in the TechRadar Phone Awards to be in with a chance of winning one of 13 high end smartphones!