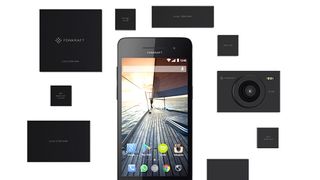 While many people have been waiting patiently for Google to finally release Project Ara, the modular smartphone you can build yourself, it's been beaten to market by the relatively unknown Fonkraft handset.

The basic handset of the crowd-sourced modular smartphone comes with a 5-inch full HD display (with a pixel density of 441ppi), Android Lollipop, and is completely customisable so you can swap out the RAM, battery, camera and even the screen for different specifications.

To help you choose there are a number of ready-made configurations that you can buy via Fonkraft's Indigogo page, depending on what sort of phone you'd like.

The basic model, known as the Fonkraft Pilot, is aimed at delivering battery life in spades with an additional 3,100mAh battery alongside a smaller 1,000mAh battery.

If you like listening to music on your smartphone, then there's the Fonkraft HiFi which comes with a a 192kHz HiFi module made of wood for high quality audio playback.

If you can't make up your mind you can also buy the Fonkraft Elements which comes with all the modules and lets you swap them out to build your own configurations at will for $200 (around £129, AU$250).

Although Fonkraft has launched before Project Ara to claim the title of the world's first modular smartphone, Project Ara has a more recognisable name which means we might see wider support for Google's offering.

Even so, Fonkraft plans to bring out more modules in the future, including a second SIM tray, extra antenna and 16-megapixel camera. In a similar move to Google, Fonkraft will allow third parties to build and sell their own modules.

You can buy a Fonkraft now, but it will be shipped in September. It's a bit of a wait, but you'll still get one before Project Ara launches.