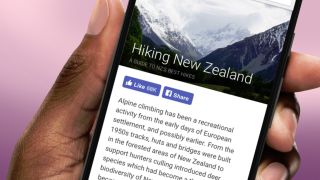 I like Liking things. Most of the time, after I read an article or see some other type of amusing content online, I just want to Like it. Not share it on my News Feed, not blast it to my Twitter followers, but simply give it a thumbs up. A small virtual gesture that says, "Nice one."

Facebook today made a little change that, if I could give it a click-induced vote of approval, I would. The network tweaked the design of its social plugin Like button, removing the lower case "f" and replacing it with a thumbs up.

It's a tiny change, and will probably go unnoticed by many, but its aim is to make it easier to understand what the Like button is all about. Facebook says it's already seen an increase in use between the new button and the old in testing, so more people should get to clicking the thumb one once it starts popping up on websites everywhere.

Facebook isn't stopping there, though: it's making all its social plugin buttons more mobile friendly, and a cleaner, flatter, more refined look better reflects the social network's style, it says. Soon, you'll start to see Like, Share and Comment buttons on Instant Articles, too.

The button changes should increase engagement, if only slightly, and modernize the look of the blue slabs that live on just about every page of the web these days. The Chrome extensions will make for quicker sharing and saving – if you use the browser, that is.