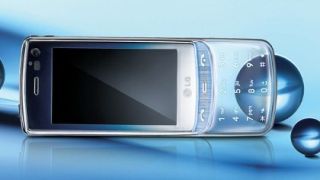 Well, if you can make the keyboard see-through...

"[Transparent displays in phones] will happen near the end of 2013. Trust me."

That's the claim made by Polytron Technologies' General Manager Sam Yu to PC World last year - and this is from a company heavily involved in developing the technology.

Yet we're well into 2014, and there's still no sign of a real-life equivalent of the Minority Report screen which embedded itself into popular culture 12 years ago. By the time Robert Downey Jr. was sporting a transparent smartphone in 2010's Iron Man 2, Sony Ericsson had already unveiled the Xperia Pureness.

It was an expensive feature phone with few features and a transparent 1.8-inch monochrome display with a 320 x 240 pixel resolution.

If you've never heard of it that's probably because it was given a very limited release and sold as a status symbol for fashionistas. The Lenovo S800 was a similar device which landed in the Philippines in 2011, but never made it into Western markets.

In February last year a little known Taiwanese company by the name of Polytron caused a stir with a transparent glass smartphone prototype.

The prototype was non-functional and more than a year later there's still nothing on the market. Polytron didn't respond to our request for an interview.

We asked OLED designer Jan Hesse of the Fraunhofer Institute in Freiburg, where they've designed transparent OLED lighting panels, and he told us "it's a matter of very poor contrast. Due to the fact that with transparent screens the background is visible…and the brightness is lower than with standard single side emitting OLED displays."

They use two transparent electrodes, but the OLED panels they produced essentially consist of one (very large) pixel. He thinks transparent displays in smartphones and tablets are unlikely be anything other than niche products, and it seems that the bigger brands are finding the same problems.

"Conventional LCD panels have their limitations [in terms of being transparent] because of their low transmittance," explained Senior Research Engineer, Young-Min Jung, in an LG Display press release from February this year, focussing on a transparent display designed to replace a conventional refrigerator door, so that you can see what's inside without opening it.

"We can control the brightness with stronger backlight, but it then becomes less energy efficient as it consumes more electrical power."

Chief Research Engineer, Wonho Lee from LG Display confirmed the 55-inch transparent refrigerator will be produced this year, but only for commercial purposes, although he did add that the brand expected the product type to grow.

Samsung has also shown off transparent displays, but the focus seems to be on digital signage and display cases for businesses.

The Wall Street Journal reported that Samsung filed a patent for a camera with a transparent display in Korea back in March, but there hasn't been any news about a smartphone or tablet.

When we contacted them, both Samsung and LG Display also declined to comment.

Current page: Through the looking glass