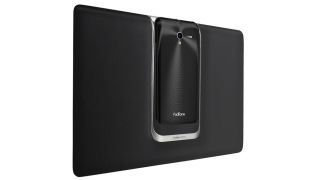 Is it a bird, is it a plane? No, it's some kind of smartphone-tablet thing

The Asus Padfone 2 may arrive in stores sooner than expected after reports suggest the smartphone-tablet hybrid will go on sale in Germany on December 1.

According to German site Inside-Handy, it has received confirmation that the Asus Padfone 2 will be in stock from the beginning of December, although we've spoken to the Taiwanese firm and it is yet to confirm or deny this.

The original Asus Padfone failed to make it out of Asia but the Padfone 2 has been pegged for a European launch at least.

It's currently thought the Padfone 2 will arrive in Europe at the start of 2013 but this latest news does raise hopes of an earlier arrival.

The tablet dock offers up a 10.1-inch HD display and a 5000mAh battery, which will charge the phone when it's docked.

We're still unsure if the smartphone-tablet hybrid concept will be a success - with the high asking price Asus may find it hard to shift the combo.