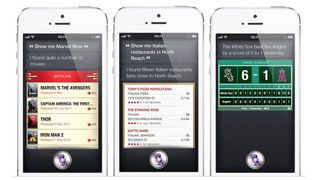 People are buying iPhones and Android as if it's the end of the world.

Apple has the leading smartphone operating system in the United States according to new data released today, but the same sales charts show that Google is taking a bite of Apple's pie throughout Europe.

"Apple has reached a major milestone in the U.S. by passing the 50% share mark for the first time," said Dominic Sunnebo, global consumer insight director at Kantar Worldpanel ComTech.

His report cites the iPhone 5 launch as a boost to the company's improved marketshare, lifting Apple to 53.3 percent of sales this year from 35.8 percent last year.

"Further gains [are] expected to be made during December," which is good news for Apple... in the United States.

Stay Calm and carry an Android

Apple isn't having as much luck in Europe, however, giving Google chairman Eric Schmidt more reason to gloat over what he calls a cold war between the two companies.

Android's marketshare is now 61 percent there, which is nearly a 10 percent increase from last year's 51.8 percent in the EU5.

Germany was home to a 7.2 percent Android sales bump, while iPhone's gains barely registered with a .03 percent increase.

iPhone's marketshare was down in Italy and Spain, and non-European countries Australia and Brazil. The contrast was starkest in Spain, where Apple controlled 2.5 percent fewer smartphone sales than last year, while Android lept up a significant 25.4 percent.

Great Britain was the only European country in the report where Apple cut into Google's lead. iPhone sales increased 5.3 percent compared to Android's bump of 4.9 percent.

Of course, Google still controls this market, with the newewst numbers standing at 51.5 percent for Android handsets and 36.1 percent for the iPhone during the 12-week reporting period.

Apple and Google were both winners on their respective mobile operating systems when it comes to dominating app installs.

Publishers with the top app downloads in 2012 were Apple on iOS and Google on Android, according to a report compiled by Distimo analyst Gert Jan Spriensma.

With six iPad apps and seven iPhone apps, averaging $7.43, Apple landed the number one spot on its own App Store charts.

Apple's Garage Band app was cited as a "popular app example" in the analysts' 2012 recap, finishing ahead of game developer Gameloft in second, and Google in third.

Google narrowed the gap on Apple's App Store charts. Its recently released maps app experienced 10 million downloads in the first 48 hours and is favored in the Google Maps vs App Maps war.

Google did manage to pull off a first-place finish in the same report's analysis of top Google Play downloads. Facebook checked in at No. 2, while Angry Birds publisher Rovio slingshot its way to No. 3.

More Google vs. Apple to come

Apple's marketshare have grown tremendously in the U.S. in 2012 due in part to the iPhone 5, but the Apple vs. Google fight will rage on.

Google's more affordable smartphones are driving its numbers up in Europe and the company is set to top one billion Android activations by next year.

On top of that, according to another previously released report, Android is at a 75 percent worldwide marketshare.

With some saying that without Google, Apple would be nothing, there's clearly more "app-athy" to come in 2013.