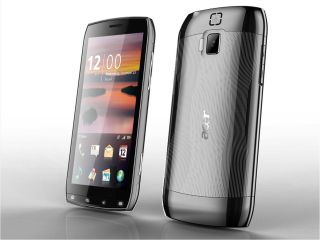 Acer has announced a new smartphone with some high-end tech specs - but decided against giving it a name.

The new 'next generation smartphone' has a massive 4.8-inch screen, taking it into Dell Streak territory, where it also runs Android, but with no mention of which version of Google's OS it will come with.

It comes with a 1024 x 480 resolution display as well, making it technically the highest-res smartphone out there, although whether this is a big phone or a small tablet has yet to be decided - and the pixels per inch still won't match the iPhone 4.

Curiously it's got a 21:9 ratio display, something we've not seen since the iconic LG Chocolate BL40 last year.

With dimensions of 141.7 x 64 x 13.3mm and a 170g weight, it might be a little hefty in the pocket, although the width will attract some of the more style-conscious out there.

Snapping and all that

There's an 8MP camera bolted on the back with single LED flash, and a 2MP front camera for video calling. DLNA technology lets you stream media from your PC, and an HDMI connectivity cable.

A 6-axis gyroscope, like that seen on the iPhone 4, will make gaming a lot more fun - although the lack of Android games that support this function are at a premium at the moment, so Acer's claim of 'a perfect games console' is a little optimistic.

So is the claim that 'the LED backlit display uses the same technology as TV showing super bright and vivid images' - which feels a little like saying the metal chassis is made the same way as your car.

We've decided to call this smartphone the Acer River - we've had the Liquid and the Stream, so it's easy to see the water-themed corollary Acer's going for here.